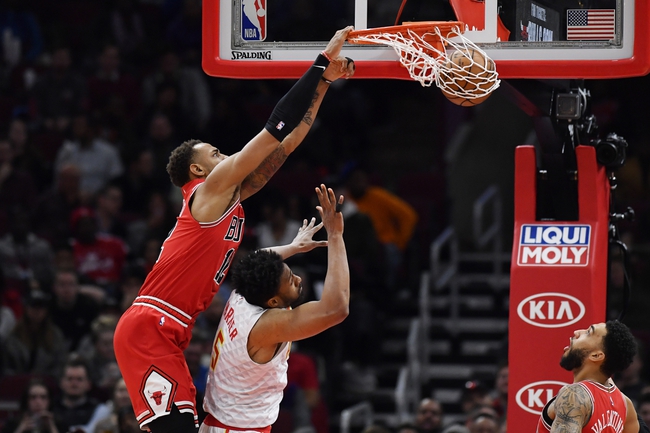 Two teams trying to work their way into the top eight of the Eastern Conference will face off on Friday night when the Charlotte Hornets (11-16) travel to the United Center to take on the Chicago Bulls (9-17). The Hornets enter this game just 1.5 games out of those coveted top eight spots, while the Bulls are only three games back.

Only being three games back is good news for Chicago as well since it is beginning to play much better basketball as of late, even though it hasn’t necessarily been able to get the results it is looking for. Coming off of a 136-102 win over Atlanta, the Bulls lost three straight -- one was an inexplicable loss to Golden State, but the other two were an overtime defeat at Miami and a one-point home loss to Toronto. Those losses were preceded by a pair of wins over Memphis and Sacramento, showing that Chicago isn’t far off from what could have been an excellent week.

Zach LaVine went off for 35 points in the win over Atlanta, a mark that is even more incredible considering that he only played the first three quarters. LaVine was on fire, shooting 12-of-16 from the field and making all seven of his 3-point attempts. Lauri Markkanen added 22 points on 8-of-9 shooting from the field, Coby White scored 19 and Thaddeus Young scored 15 points with nine rebounds and six assists off the bench, and Wendell Carter Jr. scored 11 points with 10 rebounds in the win.

Charlotte has won just three of its last seven games and five of its last 14 games, but it is sitting currently on a modest two-game win streak. The Hornets knocked off Brooklyn on Wednesday by five points on the second game of a back-to-back after edging past Washington 114-107 on Tuesday. But prior to that, losses to Milwaukee, Phoenix, Brooklyn, and Atlanta were sandwiched around a 15-point win over Golden State. A win over Chicago would produce a three-game win streak, which would tie for a season’s best.

While LaVine had a big game in his last outing, Charlotte’s Devonte’ Graham did even better, scoring a career-high 40 points to lead the Hornets back from a 20-point deficit to beat Brooklyn. Graham made 12 of his 21 shots including 7-of-12 from 3-point range to go along with five assists and five rebounds. Five other Hornets scored in double figures, including Miles Bridges with 14, PJ Washington with 13 points and six rebounds, Terry Rozier with 13 points and seven rebounds, Michael Kidd-Gilchrist with 11 points and seven rebounds, and Cody Zeller with 10 points and six rebounds.

Charlotte is basically dependent on Graham having a big night to stay in games. In the Hornets’ last three wins, Graham has scored 40, 29, and 33. What are the chances that he’ll have another monster game? Probably not at the 30-point level as he most likely regresses back to his 20.0 point-per-game average. And without that huge night from Graham, Charlotte won’t be able to hang with LaVine and Markkanen. On top of that, Chicago is 5-2 against the spread this season as a home favorite, so go with the home team and give up the points without fear.