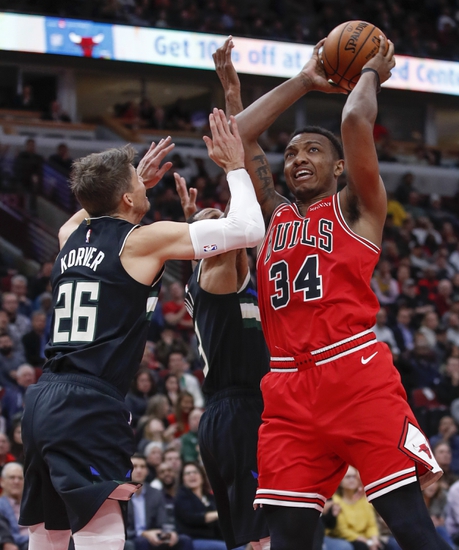 Two teams looking to turn their season around and one will get a win when the Detroit Pistons (4-9) invade the United Center in Chicago to take on the Bulls (4-10) on Wednesday night. For one team, a losing streak will be broken with the Bulls entering the game on a three-game losing streak and the Pistons sitting on a four-game skid.

Neither team has played well as they edge toward the quarter-point of the season. Chicago is 1-4 in its last five games and 2-6 in its last eight, while Detroit is on a four-game losing streak, while going 1-5 in its last six games, and 2-7 in its last nine. Offensively, the Bulls are 21st in the NBA scoring 107.2 points per game while ranking 18th in the league in defense allowing 111.3 points per game. The Pistons rank 19th in both offense and scoring defense at 108.7 and 112.2 points per game respectively. Needless to say, it hasn’t been pretty for either team so far.

Despite how bad both teams are playing, they both have plenty to play for. Of course, all teams are still alive in the hunt for a playoff spot this early in the season, but considering that both teams play in the relatively weaker Eastern Conference, they both really have reason to be hopeful. As bad as it has been, Chicago is just two games out of the Eastern Conference top eight, while Detroit is amazingly just a game-and-a-half out.

Blake Griffin’s return to the Pistons two games ago gave the team some hope, but he hasn’t found his way back to full effectiveness as of yet. He is averaging 19.0 points per game, but in Detroit’s most recent loss, a 109-106 loss to Charlotte, Griffin shot just 6-of-19 from the field including 1-of-8 from 3-point range, clearly minimizing his effectiveness.

Instead, it has been Andre Drummond and Luke Kennard stealing the show, with Langston Galloway putting up big numbers as late. Drummond continues to lead the NBA with 17.0 rebounds per game and adds 19.6 points per game, while Kennard is scoring 17.8 points per game. Galloway is effective off the bench scoring 13.2 points per game, including a massive 32-point effort against the Hornets his last time out. Galloway was 11-of-16 shooting including 7-of-11 from long range in the lost.

Of course one of the main stories will be Derrick Rose returning to Chicago where he began his career, won the NBA Most Valuable Player award, and saw so much of his success — and injuries — throughout his career. Rose is joining Galloway off the bench scoring 18.4 points with 5.8 assists this season when healthy.

While the Pistons are waiting for Griffin to heat up, it is the Bulls who are waiting for young 22-year-old Lauri Markkanen to get going. While it is still early going, Markkanen is still waiting to find his way, averaging career lows so far this season in field goal percentage (36.2 percent), 3-point percentage (26.8 percent), and points (14.1 points per game). In Chicago’s most recent game, a 115-101 loss to Milwaukee, Markkanen scored just nine points 2-of-12 shooting, including 0-for-4 from long range.

Neither of these teams is good against the spread (Chicago 6-8, Detroit 4-8-1), and neither team has shown much consistency when it comes to facing the total, with the Bulls splitting the over and under evenly through 14 games, while the Pistons are slightly better going over in eight of 13 games. But one trend does stand out, and that trend is going to push the smart bettor into taking the over in this one. While Chicago is even in total bets this year, it has gone over all three games that it enters as a home favorite. And even though Detroit has trended toward the over, it has gone over in five of six games as a road underdog this season.

These two teams have been incredibly difficult to read all season long. But nothing is better than two teams with two standout players ready to break out for a big offensive night, a former Chicago star coming back wanting to show off his skills to the crowd, two teams that hit the over in this circumstance almost exclusively, and a total that sits at just 218.5. That’s certainly doable for these two teams. Take the over and enjoy every bucket going both directions.