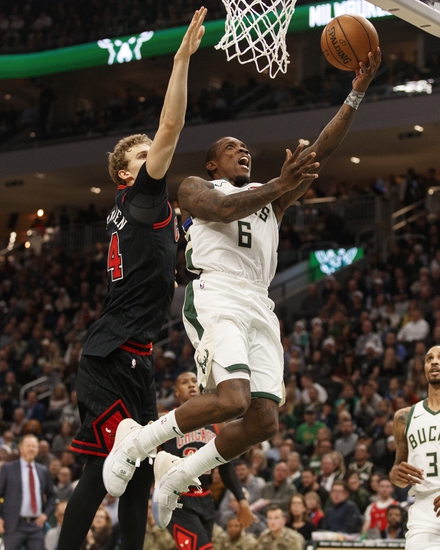 The Milwaukee Bucks head to Chicago on Monday for a game against the Bull in a battle between two teams in the Central Division.  The Bucks enter the game after winning their last game 102-83 against the Indiana Pacers.  Giannis Antetokounmpo was in his usual MVP form as he led the Bucks in points scoring 26 on the night while shooting 10 of 17 from the field and 3 of 5 from the free throw line.  Antetokounmpo also led the Bucks in rebounds recording 16 with 3 coming offensively. Antetokounmpo also led Milwaukee in assists with 6 while playing 28 minutes in the game against Indiana.

On the year, the Milwaukee Bucks are now 9-3 and are currently in 1st place in the Central Division.  Giannis Antetokounmpo leads the Bucks in points per game with 30.1, rebounds per game with 14.3 and assist per game with 6.5.  Looking at the Bucks stats, it’s clear that in order for the Bucks to be successful, Antetokounmpo has to be the lead man for Milwaukee.  The Bucks enter Monday’s game with a clean bill of health as they do not have any players listed on their injury report.

The Bulls welcome the Bucks to Chicago after losing their last game to the Brooklyn Nets by the score of 117-111.  Zach LaVine led the Bulls in points on the night with 36 while shooting 11 of 24 from the field and 11 of 12 from the free throw line.  Wendell Carter Jr. led the Bulls in rebounds with 14, with 9 coming offensively.  Coby White led Chicago in assists on the night with 3 in the 29 minutes that he played against the Nets.

The Bulls enter Monday’s game with a record of 4-9 and are currently sitting in 4th place in the Central Division.  Zach LaVine has been the Bulls leading scorer on the year and is averaging 21.6 points per game.  Wendell Carter Jr. has been Chicago’s leading rebounder as he as averaged 9.8 rebounds per game.  Tomas Satoransky has led the Bulls in assists per game on the year and is averaging 4.9 assists per game.  The Bulls enter Monday’s game with just 1 player listed on their injury report as Otto Porter Jr. is listed as out.