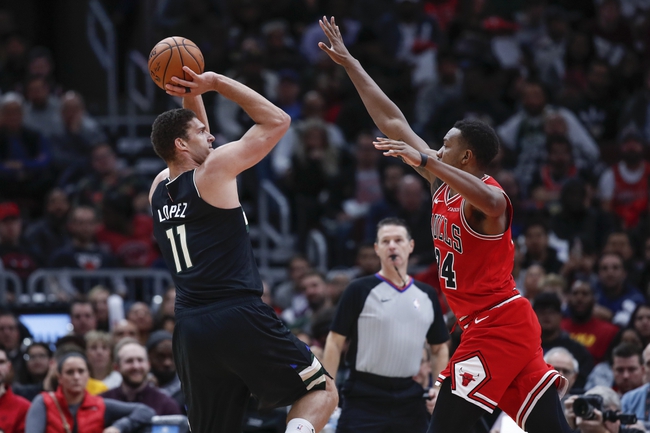 Chicago is playing its best basketball of the year and will host the best team in the NBA when the Bulls (13-20) host the Milwaukee Bucks (29-5) at United Center on Monday. Chicago’s chances will improve greatly if the reigning NBA MVP Giannis Antetokounmpo doesn’t play for the third game in a row.

Antetokounmpo has missed two games with back soreness and is officially listed as questionable for Monday’s matchup against the Bulls. But Milwaukee has shown that it can with without its superstar with back-to-back wins over Atlanta and Orlando -- both by double digits. Despite improved form from Chicago, it makes sense that the Bucks should figure that they can win without Antetokounmpo and allow him to rest prior to a New Year’s Day matchup against Minnesota.

With Antetokounmpo on the bench, it was a pure team effort in the 111-100 win over Orlando on Saturday. Five players scored in double digits with Khris Middleton leading the way with 21 points and seven assists. Middleton led his team in scoring for the second straight game with Antetokounmpo out of the lineup. Ersan Ilyasova recorded a double-double with 17 points and 14 rebounds to go along with five assists, and he hit five of his six 3-point shots. Robin Lopez and George Hill added 17 points apiece off of the bench, and Brook Lopez added 10 points in the win.

Chicago might be just 13-20 on the season, but it is on its best run of the season winning three of its last four games, four of its last six games, and five of its last eight. Prior to that, the Bulls were just 8-17. This current positive run includes a win over the Clippers (although they were missing Kawhi Leonard, Lou Williams, Patrick Beverly, and JaMychal Green), a 12-point win on the road at Detroit, and a 35-point victory over Atlanta. This streak began with another win over Atlanta, this time a 34-point win.

In the most recent win over the Hawks, Lauri Markkanen led his team with 25 points connecting on 4-of-9 shots from 3-point range. Zach Lavine scored 19 points with seven rebounds, and Coby White came off the bench for 18 points on 8-of-11 shooting from the field. Wendell Carter Jr. added 13 points and eight rebounds, Tomas Satoransky added 11 points, eight rebounds, six assists, and three steals, and Thaddeus Young scored 10 points with six rebounds off the bench.

Milwaukee has shown that it can win against the lower tier NBA teams without Antetokounmpo, and at 13-20, can Chicago really consider itself any better than lower tier? The Bulls might be making strides, and they might be only a game-and-a-half out of the Eastern Conference’s top eight because the East is so weak, but they are still barely above the lower third of the league. Orlando actually has a better record than Chicago and the Bucks knocked off the Magic without Antetokounmpo by 11.

On top of that, Chicago just isn’t a good enough offensive team to hang with Milwaukee, with or without Antetokounmpo. The Bulls rank just 24th in the NBA in scoring offense and they are 28th in the league as a home team, scoring just 104.4 points per game. In contrast, the Bucks are the top-scoring team in the NBA at 119.7 points per game. It’s going to be too much for the Bulls. With Antetokounmpo, this is a blowout. Without him, this is still a double-digit game. Take the Bucks minus the points on the road for a big win.