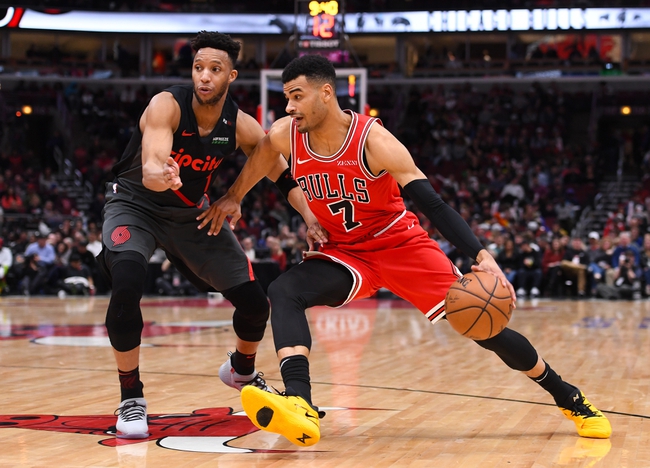 The Portland Trail Blazers head to Chicago on Monday, for a matchup with the Bulls in what should be a good game between a team from the Eastern Conference and a team from the Western Conference.  In Portland’s last game, they were defeated by the Cleveland Cavaliers by the score of 110-104.  Damian Lillard led the way for the Trail Blazers scoring 23 points while going 7 of 20 from the field and 5 of 6 at the free throw line.  Lillard also led the Trail Blazers in rebounds in the game, pulling in 8 with 3 coming offensively.  Lillard also led Portland in assists, recording 8 while playing a total of 37 minutes in the game.

The Bulls welcome the Trail Blazers to Chicago after winning their last game against the Charlotte Hornets by the score of 116-115.  Zach LaVine led the Bulls in points on the night with 49 while shooting 17 of 28 from the field and 2 of 2 from the free throw line.  Wendell Carter Jr. led the Bulls in rebounds with 11, with 5 coming offensively. Tomas Satoransky led Chicago in assists on the night with 8 in the 28 minutes that he played against the Hornets.

The Bulls enter Monday’s game with a record of 6-11 and are currently sitting in 3rd place in the Central Division.  Zach LaVine has been the Bulls leading scorer on the year and is averaging 21.2 points per game.  Wendell Carter Jr. has been Chicago’s leading rebounder as he as averaged 9.8 rebounds per game.  Tomas Satoransky has led the Bulls in assists per game on the year and is averaging 5 assists per game.  The Bulls enter Monday’s game with just 1 player listed on their injury report as Otto Porter Jr. is listed as out.