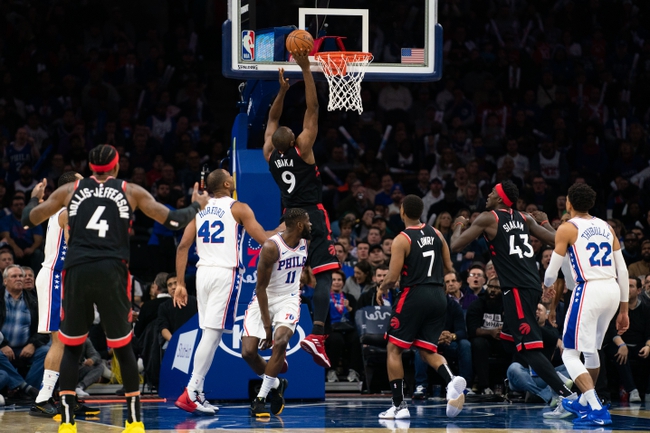 Two teams looking to get back on the winning side of the ball will meet up in Chicago on Monday when the defending NBA champion Toronto Raptors (15-7) will travel to take on the Bulls (8-16). Toronto has lost three in a row after starting the season at 15-4, while the Bulls have lost two straight games.

Toronto has lost three in a row, but those losses are against teams that are among the best in the NBA. In fact, all seven of Toronto’s losses have come against the NBA’s elite -- Boston, Milwaukee, the Clippers, Dallas, Miami, Houston, and Philadelphia. The problem is the Toronto has just three wins against the better teams in the league with victories over the Lakers, Philadelphia, and Utah. Does that mean that Toronto is just a really good second-tier team in the NBA, or does Toronto belong in the conversation of top 10 or better teams in the league?

The Raptors didn’t do enough to slow down the 76ers on Sunday in the 110-104 loss. Philadelphia shot better than 50 percent from the field and 43.8 percent from 3-point range to win the game that was more lopsided than the final score might suggest. Kyle Lowry led Toronto in scoring with 26 points and added six rebounds and five assists in the losing effort. OG Anunoby added 19 points and 10 rebounds, and Pascal Siakam scored 16 points with seven rebounds. Serge Ibaka and Rondae Hollis-Jefferson each scored 12 points off the bench.

The Bulls have simply been impossible to figure out this season. They have done something that no other team in the NBA can claim -- they have lost twice this season to Golden State -- but they also just took Miami to overtime on Sunday before falling in a 110-105 game. Chicago did win two in a row for its only win streak this season prior to the most recent Warrior loss on Friday, but the Bulls have lost eight of their last 12 games.

Against the Heat, Lauri Markkanen led his team with 22 points, breaking eight straight games that Zach LaVine led the Bulls in scoring. Markkanen also pulled in seven rebounds. LaVine scored 18 points with six rebounds but shot 5-of-19 from the field and 1-of-8 from 3-point range. He also had seven turnovers before fouling out. Kris Dunn added 16 points, while Thaddeus Young added 12 and Coby White and Denzel Valentine each scored 11 points in the loss.

Both teams are on their second day of back-to-back games, so there shouldn’t be much of an advantage either way. Chicago is at home but played at Miami on Sunday night, while Toronto will have both games on the road but will have about half of much travel going from Philadelphia to Chicago. The spread seems very small as Toronto is very much the better team here, and with both teams playing on back-to-back nights, it seems the Raptors might be bigger favorites.

Combine that with the fact that Chicago is just 1-5 against the spread this season as a home favorite while Toronto is 3-1 against the spread as an underdog on the road, and it seems that Toronto is definitely the pick. Go with the Raptors minus the points to cover and get the big road win to return to their winning ways.