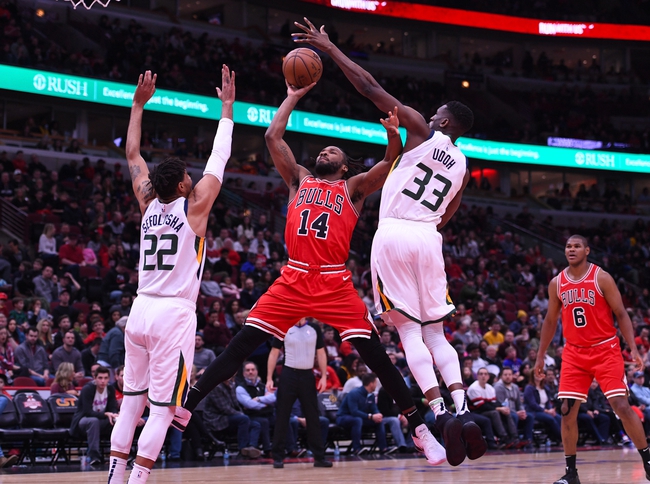 The Utah Jazz are currently 21-12 on the season which places them in 2nd place in the Northwest Division.  Donovan Mitchell leads the Jazz in points per game with 25.2.  Rudy Gobert leads the Jazz in rebounds per game as he has averaged 14.2 per game.  Joe Ingles is the assists leader for the Jazz as he is averaging 4.3 per game.  The Jazz enter Thursday’s game with a clean bill of health as they do not have anyone listed on their injury report.

The Chicago Bulls welcome the Utah Jazz to town after losing their last game against the Milwaukee Bucks by the score of 123-102.  Zach LaVine led the Bulls in points on the night with 19 while shooting 7 of 23 from the field and 6 of 7 from the free throw line.  Wendell Carter Jr. led the Bulls in rebounds with 11, with 5 coming offensively. Tomas Satoransky led Chicago in assists on the night with 7 in the 26 minutes that he played against the Bucks.

The Bulls enter Saturday’s game with a record of 13-21 and are currently sitting in 3rd place in the Central Division.  Zach LaVine has been the Bulls leading scorer on the year and is averaging 23.4 points per game.  Wendell Carter Jr. has been Chicago’s leading rebounder as he as averaged 9.8 rebounds per game.  Tomas Satoransky has led the Bulls in assists per game on the year and is averaging 5.3 assists per game.  The Bulls enter Thursday’s game with 1 player listed on their injury report as Chandler Hutchinson is listed as out.

The Utah Jazz have scored an average of 108 points per game while allowing 105.8 points per game.  The Chicago Bulls have scored 105.9 points per game while allowing 107 points per game.  In their last 5 games, the Jazz are 4-1 and have won 3 games in a row while the Bulls are 3-2.  The total has gone under in 6 of Utah's last 7 games when playing on the road against Chicago.  In their last 5 games, Utah is 4-0-1 against the spread.  In the last 3 meetings between these two teams, the Jazz are 2-1 and have outscored the Bulls by the average score of 108-96.  I am going to go with the Jazz in this one as Chicago has struggled all season and the Jazz have played well, especially as of late.  Utah wins this one 110-100 and covers the spread.