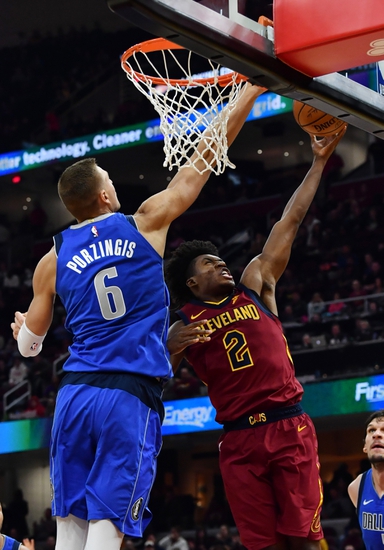 On Friday, the Cleveland Cavaliers head to Dallas for a game against the Mavericks in the second game of the year between the two teams.  In their last game, the Cavs were defeated by the Miami Heat by the score of 124-100.  Kevin Love led the Cavaliers in points with 25 while shooting 8 of 14 from the field and 4 of 4 from the free throw line.  Love also was the leader in rebounds for Cleveland as he recorded 13, with 2 coming offensively.  Matthew Dellavedova led the Cavaliers in assists on the night with 5 while playing 21 minutes In the game.

The Cavs enter their game against the Knicks with a record of 4-10 and are currently in 4th place in the Central Division.  Kevin Love leads the Cavs in points per game with 18.7 and in rebounds per game with 12.2.  Darius Garland leads the Cavaliers in assists per game with 3.3.  Cleveland enters Friday night’s game with just 1 player listed on their injury report as Brandon Knight is listed as day to day.

The Dallas Mavericks welcome the Cleveland Cavaliers to town after winning their last game 142-94 against the Golden State Warriors.  Last year’s Rookie of the Year award winner Luka Doncic led Dallas in points with 35 while shooting 11 of 18 from the field and 7 of 8 from the free throw line.  Doncic also led the Mavericks in assists on the night, recording 11 while playing 26 minutes in the game.  Doncic also led Dallas in rebounds on the night as he pulled in 10 boards, including 1 offensively.

The Mavericks are now 9-5 on the season which currently puts them in 2nd place in the Southwest Division.  Luka Doncic has been a force for the Mavericks all season and currently leads Dallas in points per game with 29.9, assists per game with 9.4, field goal percentage at 48.6 and rebounds per game with 10.6.  The Dallas Mavericks enter Friday’s game with just 1 player listed on their injury report as Seth Curry is listed as day to day.