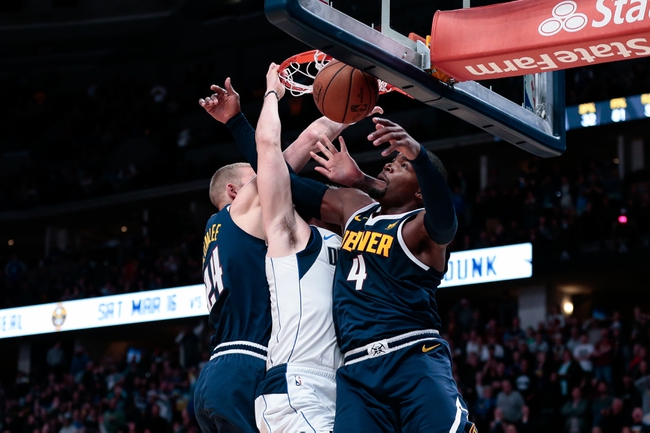 The Dallas Mavericks who are (2-1) on the season travel to Denver to take on the Nuggets (3-0).  The Mavericks are coming off a game against the Portland Trailblazers.  The game went all the way down to the wire and saw the Mavericks taking a 2 point loss at home, 121-119.  The Nuggets enter this home matchup after a 101-94 win at the Sacramento Kings.

The Mavericks saw 5 players hit double figures in the game.  Dallas was led in scoring by Kristaps Porzingis.  Porzingis was 11 of 23 from the floor, totaling 32 points and pulling down 9 rebounds.  Luka Doncic struggled from deep on the night, going 2 of 11.  Doncic was able go 11 of 14 from the foul line, helping him net 29 points in the game.  Maxi Kleber added 14 points and 3 assists.  The Mavericks as a team shot a miserable 13 of 50 (26%) from 3 point range.

In the win over the Kings, Jamal Murray took control in leading the way, scoring 18 points and netting 3 assists.  Gary Harris was 3 of 4 from 3 point range  and totaled 17 points in the outing.  Will Barton grabbed 9 rebounds and added 13 points.  As a team, the Nuggets had an assist to turnover ratio of 19 to 10.  The Nuggets shot below 28% for the game from deep.

Dallas is 1-0 ATS this season on the road.

Dallas is 5-2 ATS in their last 7 games vs Denver.

Denver is 2-1 ATS this season.

Denver has dominated the last 10 games between the Mavericks, winning 8 of them.  During those 10 games, the Nuggets are 5-5 ATS.  Dallas has played well this year, through 3 games.  Porzingis will help lead the way for the Mavericks as the season goes on and will more then likely find themselves in the playoffs.  However, Denver will be in the playoffs by season end and should be competing for the top spot.  Denver is very talented and can score from all over the court from various players.  The Nuggets have the outside deep threats, as well as an interior duo in, Nikola Jokic and Paul Millsap.  The Nuggets will be to much for the Mavericks in this one.  Final score prediction, Denver will win and cover 109-101.