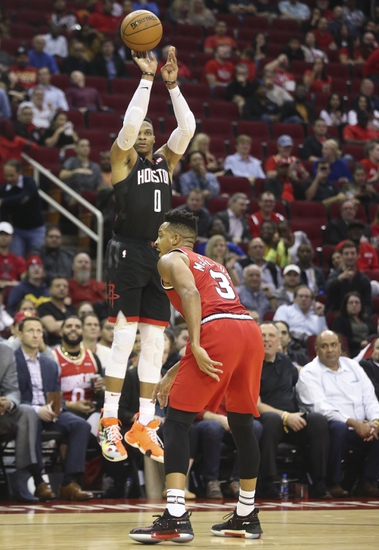 Two of the top teams in the NBA meet on Wednesday at the Pepsi Center in Denver when the Nuggets (9-3) host the Houston Rockets (11-3) in Western Conference action. Houston and Denver rank second and third in the impossibly difficult West with the Rockets sitting just a half-game behind the conference-leading Lakers and the Nuggets just one game behind Houston. The teams would move into a virtual tie for second in the conference with a Denver win.

That will be a tough ask, however, as the Rockets are currently riding an eight-game win streak and have crushed their opponents along the way. Houston is winning by an average of 14.8 points per game in those eight games, including winning by an average 23.5 points per game in their two most recent wins over quality teams in Minnesota and Portland. Russell Westbrook is settling into his role with James Harden and the pair combined for 64 points in the 132-108 victory over Portland on Monday. Harden scored 36 points while Westbrook notched a triple-double scoring 28 points with 13 rebounds and 10 assists. Clint Capela added 22 points and 20 rebounds in the win.

Harden continues to lead the NBA in scoring at 39.2 points per game and he averages 7.6 assists and 5.7 rebounds as well. Westbrook is adding 21.6 points, 8.4 rebounds, and 7.1 assists per game, while Capela averages a double-double with 14.1 points and 13.1 rebounds per game. Danuel House Jr. and Eric Gordon add 11.7 and 10.9 points per game respectively.

Denver is also on a hot streak, winning six of its last seven games, but it isn’t winning as convincingly as Houston. The Nuggets’ last six wins are still impressive, though, topping their opponents by an average of nine points per game, including a 131-114 victory over Memphis on Sunday. While Houston has top-end star power in Harden and Westbrook, Denver has depth, as any one of Jamal Murray, Nikola Jokic, Will Barton, Paul Millsap, Gary Harris, or one of several other players could lead the Nuggets offensively if necessary. Denver has had five different leading scorers this season in its 12 games.

In the win over Memphis, it was Murray who went off, scoring 39 points on 7-of-12 shooting from long range and adding eight assists in the win. Millsap added 23 points while Jokic had a quiet game scoring just nine points with five rebounds and eight assists. But that is how it is with this Denver team that can seemingly adjust with any defense thrown at it. In the Nuggets’ previous game, a 101-93 victory over Brooklyn, the Nets game Jokic room to move and he scored a team-high 18 points with 10 rebounds, but he had just three assists.

So how to pick this one? Take the team with two of the best individuals in the game or the balanced lineup? Unfortunately for Denver, this is a league of stars, and while Jokic and Murray are big-time players, Harden and Westbrook are top 10 players in the league. Giving Houston any points seems ridiculous, even though that elevation in Denver might give a player who handles the ball as much as Harden does fits. But it seems crazy to give the Rockets any points. In addition, the Nuggets have not been good against the spread as a home favorite, going 2-4 in that situation, while Houston is 1-0 as a road underdog, albeit in an extremely small sample size.

Denver is great, but it only makes sense to take Houston plus two points.