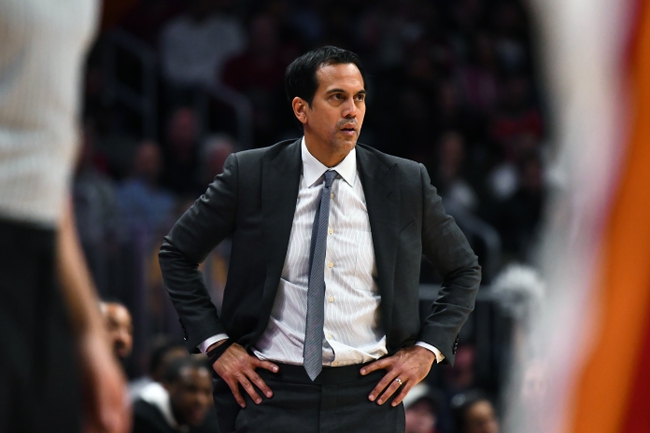 The Miami Heat head to the Mile High City of Denver, Colorado on Tuesday for a game against the Denver Nuggets.  In their last game, the Miami Heat destroyed the Houston Rockets by the score of 129-100.  This game was never really close as Miami outscored Houston by the score of 46-14 in the first quarter.  Duncan Robinson led the Heat in points with 23, while shooting 8 of 12 from the field and also added 6 rebounds and an assist.  Power forward Kelly Olynyk was productive off of the bench as he recorded a team high 8 rebounds while scoring 6 points and recording 3 assists.  The Heat’s leader in assists was Jimmy Butler who recorded 9 on the night while also scoring 18 points and getting 9 rebounds.

On the year, the Miami Heat are 5-1 and have been the hottest team in the Eastern Conference while beating a good Houston team and the Atlanta Hawks twice during their current 3 game winning streak.   Shooting guard Kendrick Nunn leads the offense in points per game and is averaging 19.5 per game.  Meanwhile Bam Adebayo is leading the Heat in assists per game with 5.2, rebounds per game with 9 and in field goal percentage as he is shooting 58.1% from the field.  The Heat enter Tuesday’s game a little dinged up as Justise Winslow is listed as day to day and Derrick Jones Jr. and KZ Okpala are listed as out on the Heat’s injury report.

The Denver Nuggets welcome the Miami Heat to town after beating the Orlando Magic in their last game by the score of 91-87.  Jamal Murray was the leader of the Nuggets offense on the night as he scored a team high 22 points while shooting 7 of 15 from the field and a perfect 6 of 6 from the free throw line.  Paul Millsap led Denver in rebounds as he recorded 11 on the night.  Center Nikola Jokic continued his productive play on the season as he led the Nuggets in assists with 4 on the night and also recorded 20 points of his own.

With the win against Orlando, the Nuggets are now 4-2 on the season and snapped a 2 game losing steak with the win.  Jamal Murray leads the Nuggets offense in points per game as he has averaged 18.5.  Nikola Jokic has also been extremely productive for Denver as he leads the Nuggets in assists per game with 6, rebounds per game with 10.5 and has also been Denver’s most accurate shooter, shooting 48% on the season.  The Nuggets enter Tuesday’s game with 2 players listed on their injury report as Bol Bol is listed as out and Will Barton is listed as day to day.