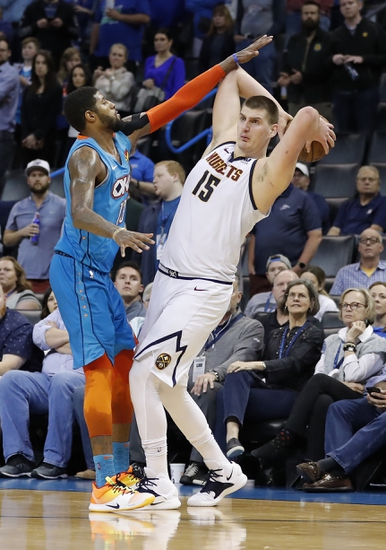 In the Thunder loss to the Kings, Oklahoma City was led offensively by Chris Paul.  Paul recorded 8 points, 7 rebounds, and 12 assists.  The Thunder shot 43% from the floor and 39% from distance.  The Thunder allowed the Kings to attempt 9 more shots in the game.  Oklahoma City finished with 24 assists and 15 turnovers.

Thunder are 0-9 ATS in their last 9 matchups with Denver.

The Nuggets have controlled the series, having won 8 of the last 10 matchups against the Thunder.  The Thunder have a losing record on the season, but have been one of the better teams ATS this season.  Oklahoma City is 16-8 ATS this year.  Both teams have a defense that ranks in the top 10 in scoring defense, with the Nuggets having the best.  The Nuggets are giving up less than 102 points per game.  The under has cashed on the regular in each teams last 7 games respected situations.  I'll side with the under, as it is hard to side with the over when the best scoring defense is involved.  Final score prediction, Nuggets will win and the total goes under, 102-98.