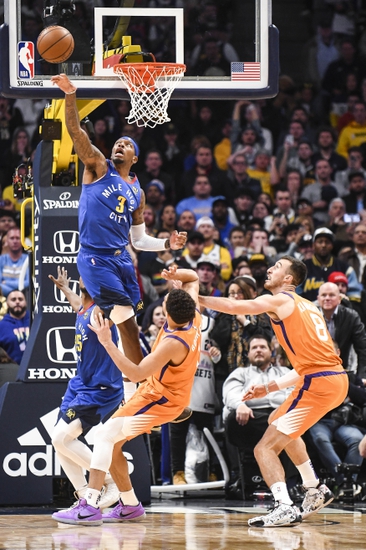 The Phoenix Suns head to Denver for a game against the Nuggets on Sunday but first must play the Minnesota Timberwolves on Saturday.  In their last game the Suns lost against the New Orleans Pelicans by the score of 124-121.  The Suns were led in scoring by Kelly Oubre Jr. who scored 25 points while shooting 7 of 17 from the field and 9 of 9 from the free throw line.  Oubre Jr. also led the Suns in rebounding as he recorded 6 on the night, including 3 offensively. Devin Booker led the Suns in assists in the game with 7 while playing a total of 37 minutes.

As of Saturday, the Suns are 7-7 and are currently in 3rd place in the Pacific Division.  The offense for the Suns is led in scoring by Devin Booker who is currently averaging 24.9 points per game.  Ricky Rubio is leading the Suns in assists per game with 8.1.  Dario Saric leads the Suns in rebounding as he is averaging 6 per game.  The Suns enter this game a little banged up as they have 5 players listed on their injury report.  Aron Baynes and Ty Jerome are listed as out while Ricky Rubio, Cameron Johnson and Frank Kaminsky are all listed as day to day.

The win against Boston improved the Denver Nuggets record to 11-3 on the season and the team is currently in 1st place in the Northwest Division.  Jamal Murray leads Denver in points per game with 18.7 on the season.  Nikola Jokic is the leading rebounder for the Nuggets as he is averaging 9.5 per game.  Jokic is also Denver’s leader in assists per game and is averaging 6.1 per game on the year.  Denver comes into Sunday’s game with a clean bill of health as they do not have any players listed on their injury report.