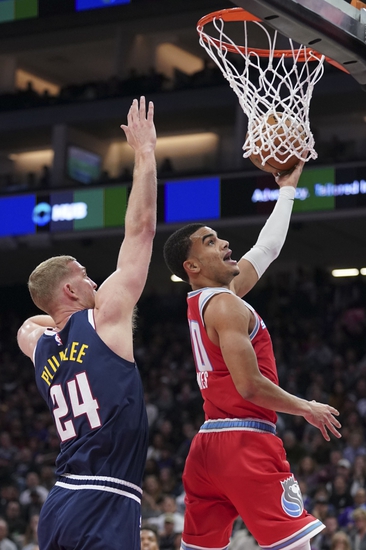 The Sacramento Kings head to Denver, CO on Sunday for a game against the Nuggets but first must face the Phoenix Suns on Saturday night.  In their last game, the Kings were defeated by the Minnesota Timberwolves by the score of 105-104 in overtime.  Richaun Holmes was the main offensive weapon for the Kings as he led the team in points with 20 while shooting 9 of 15 from the field and 2 of 2 from the free throw line.  Holmes was also the leading rebounder on the night for Sacramento as he pulled in 18 boards, including 8 coming offensively.  Cory Joseph was the leader in assists for the Kings on the night as he recorded a total of 7 while playing 40 minutes against the Timberwolves.

With the loss to the Timberwolves, the Kings are now 12-19 and are currently in 3rd place in the Pacific Division. Buddy Hield is leading Sacramento in points per game on the season with 20.2.  Cory Joseph is leading the Kings in assists per game on the season with 4.0 on the year.  Richaun Holmes has been the Kings leader in rebounds per game with 8.8.  The Kings enter Saturday’s game with 3 players on their injury report as DaQuan Jeffries, Marvin Bagley III and De’Aaron Fox are all listed as day to day.

The loss against New Orleans dropped the Denver Nuggets record to 21-9 on the season and the team is currently in 1st place in the Northwest Division.  Nikola Jokic leads Denver in points per game with 17.6 on the season.  Jokic is also the leading rebounder for the Nuggets as he is averaging 10 per game.  Jokic is also Denver’s leader in assists per game and is averaging 6.8 per game on the year.  Denver comes into Saturday’s game with 2 players listed on their injury report as Bol Bol and Paul Millsap are listed as day to day.

As of Saturday evening, the Sacramento Kings have scored 105.0 points per game while allowing 107.9 points per game.  The Denver Nuggets have scored an average of 107.5 points per game while allowing an average of 102.5 points per game.  In their last 5 games the Kings are 0-5 while the Nuggets are 4-1 as the loss to New Orleans snapped their 7 game winning streak.  The Nuggets have won both meetings with the Kings this year by the scores of 100-97 and 101-94.  This should be a close game as the two teams have played each other evenly in their last 3 meetings with the average score of 106-104 in the games.  I am going with the Nuggets in this one as they are 2-1 in their last 3 games against the Kings and are 13-4 at home this season while Sacramento is 6-12 when playing on the road.  Nuggets win 117-101 and cover the spread.