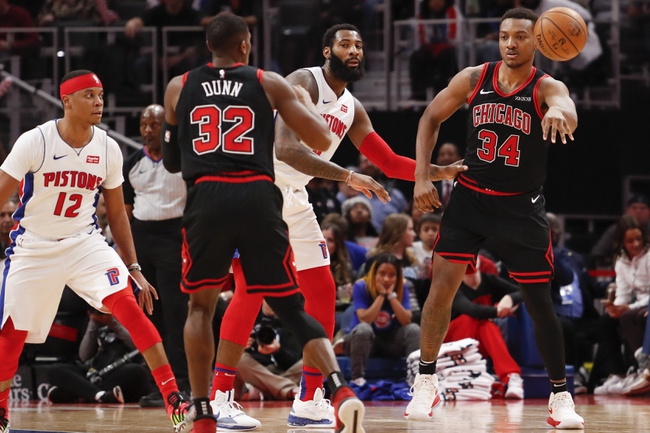 In the Bulls loss to the Pelicans, Chicago was guided during the game by Zach LaVine.  LaVine netted 32 points on 13 makes from the floor, while hitting 3 foul shots.  The Bulls shot 44% from the floor and 40% from 3-point range.  Chicago lost the game essentially from the foul line, being out scored 26 to 12.  The Bulls were out rebounded, 63 to 49.  The Bulls trailed by as many as 21 points.

In the Pistons loss to the Cavaliers, Detroit was led on offense by Andre Drummond.  Drummond had a monster of a double-double, finishing with 28 points and 23 rebounds.  The Pistons shot 49% from the floor and 30% from 3-point range.  Detroit lost by 3 and were out scored from the foul line by 4 points.  The Pistons led by 13 points in the game, before falling in OT.

The Pistons have won 7 of the last 10 matchups against the Bulls.  Chicago has lot 5 in a row and 6 of their last 7 games.  The Pistons have split their last 4 games.  This should be a close game, as both teams are averaging between 106 and 108 points per game, while giving up between 107 and 111.  Detroit is the 3rd best 3-point shooting team, while the Bulls are the 4th best 3-point defensive team.  The Pistons have been playing better than the Bulls, so I'll take Detroit in a small 4 point win.  Final score prediction, Pistons will win and cover, 108-104.