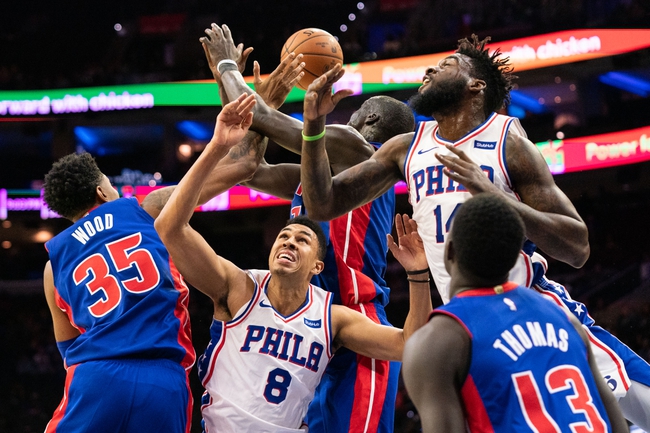 In the win over the Celtics, the 76ers saw their whole starting lineup finish in double figures.  All five starters had at least 15 points in the game. The 76ers were led in scoring by Ben Simmons with 24 points.  Simmons came 2 rebounds and 1 assist shy of a triple-double. Shooting guard Josh Richardson totaled 17 points in the win, while going 9-9 from the free throw line.  Joel Embiid contributed a double-double in the game. The 76ers shot 7 of 29 from 3 point range.

Andre Drummond after his double-double in the loss, Thursday night, now has a double-double in both games this season. Drummond had 21 points while snagging 12 rebounds.  Starting point guard Reggie Jackson was limited to 15 minutes in the game due to an injury. Derrick Rose saw extended playing time due to Jackson’s injury. Rose did not disappoint, shooting 11 of 16. Rose totaled 27 points in the loss.

The 76ers are the better team between the two.  The Pistons are coming off a 17 point loss at home.  Neither team was very good ATS in certain situations last year, but the under showed some profit. The 76ers are 7-3 ATS in the last 10 games against the Pistons.  The under is 6-4 in the last 10 matchups between the two.  I'm not that thrilled with the Pistons offense besides Drummond.  Final score prediction, the 76ers win and the total goes under 108-102.