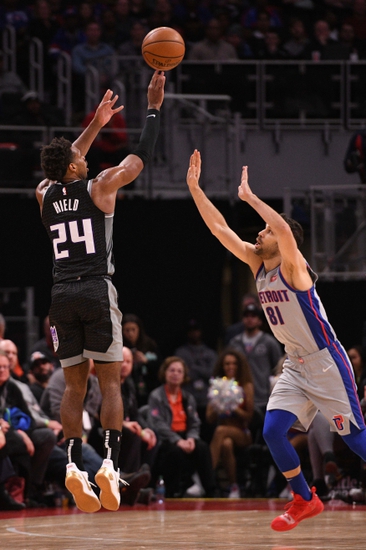 In the Kings loss to the Heat, Sacramento was guided on offense by Nemanja Bjelica.  Bjelica was 8 of 13 attempts from the floor, hitting all 4 free throws, finishing with 22 points.  The Kings shot 41% from the floor and 25% from 3-point range.  Sacramento lost the game, due to their inability to defend the long ball.  The Kings allowed 16 3-pointers, while allowing the Heat to shoot over 50% from the floor.  The Kings led by 2 points, heading to the 4th quarter.

In the Pistons loss to the Wizards, Detroit was led throughout the game by Derrick Rose.  Rose connected on 8 of 21 attempts from the floor, hitting 4 free throws, registering 21 points.  The Pistons shot 43% from the floor and 31% from distance.  Detroit struggled on defense, allowing the Wizards to shoot 51%, while attempting 7 less shots than the Pistons.  Detroit led by 8 points in the game.

Kings are 4-1-1 ATS in their last 6 games against Detroit.

Pistons are 1-8 ATS in their last 9 home games.

The Kings have lost 5 in a row, while the Pistons have lost 4 of their last 6.  The Pistons have lost their last 4 games by single digits, while having a win over Boston in this stretch.  Detroit is the 4th best offensive 3-point shooting team, while Sacramento ranks 11th in defending the 3.  The Kings don't have a great offense, so I'll for the Pistons to take advantage of open space from deep.  Final score prediction, Pistons will win and cover, 109-106.