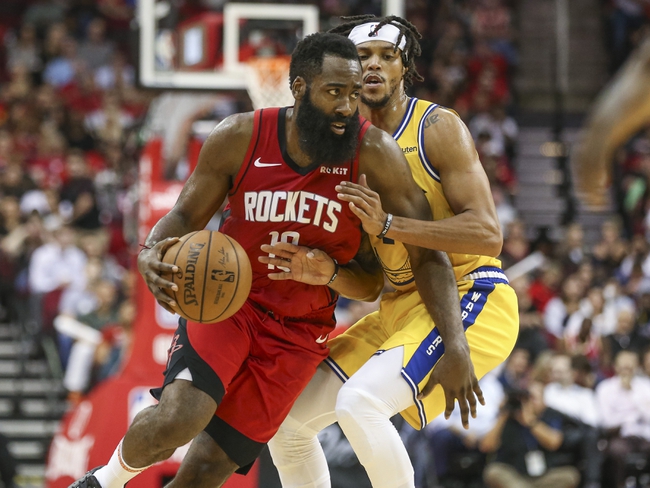 The Houston Rockets head to San Francisco, California on Wednesday for a game against the Golden State Warriors in a battle between two teams in the Western Conference.  In their last game the Rockets defeated the Sacramento Kings by the score of 113-104.  As usual, James Harden led the Rockets in scoring as he recorded 34 points while shooting 10 of 19 from the field and 10 of 12 from the free throw line.  Clint Capela led the Rockets in rebounding on the night as he pulled in 14 boards including 3 coming offensively.  Russell Westbrook led Houston in assists on the night as he recorded a total of 6 while playing 40 minutes in the game against Sacramento.

With the win in their last game, the Houston Rockets are now 21-9 and are currently in 1st place in the Southwest Division.  James Harden is Houston’s leading scorer and is scoring 38.6 points per game and is always a threat to shoot. Harden is also the Rockets leader in assists per game with 7.4.  Center Clint Capela is the leading rebounder for the Rockets as he has averaged 14.5 rebounds per game, including an average of 4 per game while on offense.  The Rockets come into Wednesday’s game with 1 player on their injury report as Thabo Sefolosha is listed as day to day.

The Golden State Warriors welcome the Houston Rockets to town on Wednesday in what should be an interesting game on Christmas Day.  In their last game, Golden State defeated the Minnesota Timberwolves by the score of 113-104. D’Angelo Russell led Golden State in scoring on the night as he totaled 30 points while shooting 8 of 18 from the field and 9 of 10 from the free throw line.  Draymond Green led the Warriors in rebounds on the night totaling 14 in the game with one coming offensively.  Alec Burks led the Warriors in assists on the night as he recorded 8 in the 34 minutes that he played against the Timberwolves.

On the year, Golden State is now 7-24 and are a far cry from the team they have been in years past.  The Warriors are currently in 5th place in the Pacific Division.  Alec Burks leads the Warriors in points per game on the year with 15.9 and in assists per game with 3.1.  Golden State’s most productive rebounder has been Willie Cauley-Stein who has averaged 6.4 rebounds per game.  The Warriors come into Wednesday’s game with 1 player listed on their injury report as Glenn Robinson III is listed as day to day.

The Houston Rockets have scored an average of 120.2 points per game on the year while allowing an average of 114.4 points per game.  The Golden State Warriors have averaged 104.9 points per game while allowing 113.3 points per game so far this season.  In their last 5 games, the Rockets are 4-1 and have won 4 games in a row while the Warriors are 2-3 but have won their last 2 games.  The Rockets won the first meeting of the season between these two teams by the score of 129-112 in a game played in Houston.  Although the teams matchup evenly defensively, Houston has been much better on offense this season and therefore, I will be going with them in this one.  I will also be going with Houston due to the fact that they are 11-5 on the road this season while the Warriors are 4-10 at home.  I will also be going with Houston to cover the spread in this one as they have scored 16 more points per game than Golden State and are 4-1 against the spread in their last 5 games against Golden State.  Houston wins this one 125-110 and covers the spread.