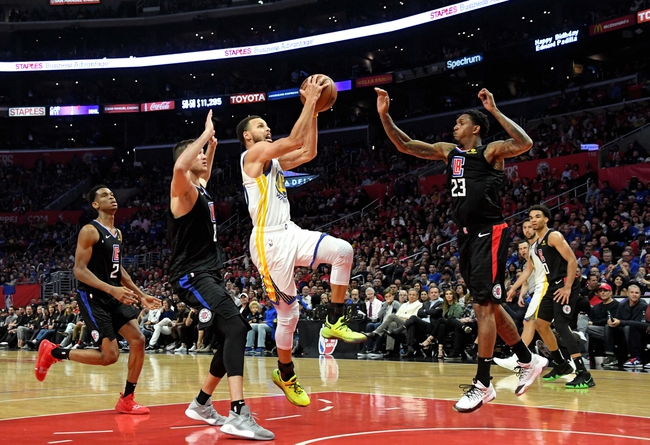 The Los Angeles Clippers enter this west coast matchup with a (1-0) record on the season. The Clippers opened the season with a 112-102 win over the Lakers.  The Golden State Warriors enter this season having finished 1st place in the Pacific with a record of (57-25).

In the win over the Lakers, the Clippers saw 5 players finish in double figures.  The leading scorer was Kawhi Leonard  with 30 points.  Shooting guard Lou Williams was second on the team in points scored with 21.  Patrick Beverley totaled 10 rebounds and added 6 assists in the game.  The Clippers as a team shot almost 52% from the field.  The Clippers had 24 assists to 14 turnovers in the win.

The Warriors are starting the season without Klay Thompson who could miss most of the season if not all of it.  Thompson is recovering from his ACL injury.  With Thompson out and the departure of Durant, the Warriors starting lineup will look different.  The projected lineup is: Stephen Curry, D'Angelo Russell, Alfonzo McKinnie, Draymond Green, and Kevon Looney. The Warriors also lost key reserve Andre Iguodala this off season.  Besides acquiring Russell this off season the Warriors also signed Willie Cauley-Stein to a 2 year deal.  Alec Burks will see time off the bench.  Steve Kerr enters his 6th season as the Warriors coach.

The Clippers ATS were 10-4 as an away favorite.

The Clippers ATS were 29-15 as the favorite.

The over was 29-14-1 when the Clippers were the favorite.

The Warriors were 8-6 ATS as an underdog.

The under was 9-5 when the Warriors were an underdog.

Both teams have added new players and have lost key players since last season.  I am more worried about how the Warriors will gel together.  Yes, most players in the starting lineup for the Warriors were on the team last year, but did not get as much playing time together, as most came off the bench. After seeing the Clippers win by double digits over the Lakers, I'm going to take the Clippers here.  The Clippers last year were also very good ATS as a favorite.  The Warriors ATS at home were not great.  Final score prediction,  Clippers win and cover 114-106.