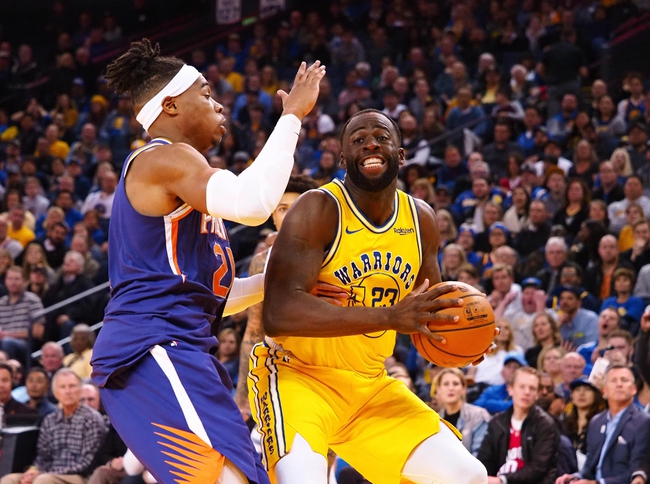 The Phoenix Suns travel to California for a Pacific Division game against the Golden State Warriors.  The Suns enter this road game with a record of (2-2).  The Suns who have been splitting games since the season started, are coming off a nail biting 96-95 loss to the Utah Jazz.  The Warriors have been trying to figure things out with Klay Thompson hurt and the departure of Kevin Durant.  The Warriors lost their first two games of the season, but one their last game 134-123 on the road against the Pelicans.  The Warriors are (1-2) thus far.

The Suns have been trying to get used to a different starting lineup, since the suspension of DeAndre Ayton has started.  Aron Baynes as of right now has slid into the starting lineup in place of Ayton.  The Suns were guided on offense by Devon Booker with 21 points.  Kelly Oubre Jr, was 7 of 19 from the floor, while contributing 18 points.  The Suns shot 41% from the floor in the loss.  The difference in the game was the free throw shooting.  The Jazz shot 82% from the line, while the Suns shot below 70%.

During the win over the Pelicans, the Warriors saw their whole starting lineup finish in double figures.  Stephen Curry led the Warriors in scoring with 26 points. Curry recorded a double-double by also totaling 11 assists.  Draymond Green registered a triple-double in the win.  Green was a monster on the glass, grabbing 17 rebounds, while also dishing out 10 assists, and adding 16 points.  D'Angelo Russell added 24 points on the night.  The Warriors out scored the Pelicans in the paint 66-62.  The Warriors led by as many as 29 in the game.

The Suns are 3-7 ATS in their last 10 games vs the Warriors.

The over is 7-1 in the Suns last 8 games following a loss.

The Warriors are 14-1 SU in their last 5 at home against the Suns.

The Suns are a perfect 4-0 ATS this season, however the Suns have struggled when playing at Golden State in recent matchups.  The Suns are allowing 105 points defensively, while the Warriors are giving up an absurd 128 per game.  Both teams are averaging over 114 offensively.  The Suns should be able to have a few more possessions this game, based on how quickly the Warriors give up points.  The over has been very profitable in the Warriors last 5 home games and after a Suns loss.  Take the over in this game.  Final score prediction, the Warriors win and the total goes over 118-113.