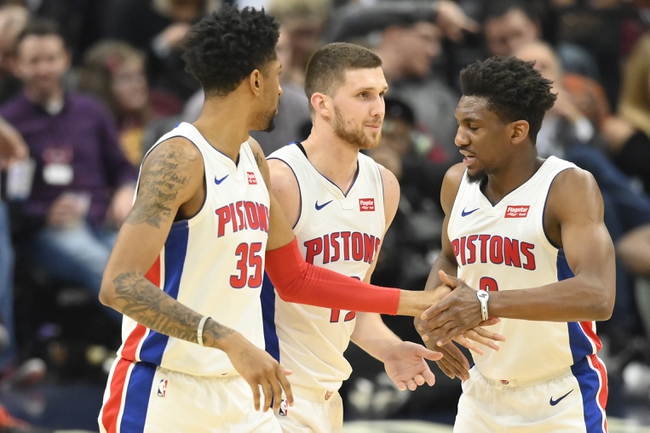 In the Pistons loss to the Mavericks, Detroit was carried throughout the game by Andre Drummond.  Drummond converted on 10 of 14 attempts from the floor, while making 3 foul shots, registering 23 points.  Drummond also pulled down 15 boards, which gave him a double-double on the night.  The Pistons shot 45% from the floor and 35% from 3-point range.  Detroit got out worked on the boards, being out rebounded, 59 to 47.

In the Rockets win over the Cavaliers, Houston was led on offense by James Harden.  Harden had an outstanding night, connecting on 20 of 34 attempts, making all 5 foul shots, registering 55 points and 8 assists.  The Rockets shot 49% from the floor and 40% from 3-point range.  The Rockets out scored the Cavaliers from the foul line, 13 to 5.

The under is 14-10 in Rockets games this season.

The Pistons have won 6 of the last 10 matchups between the two teams.  The Rockets have one of the best offense's in the league, averaging over 120 points per game.  The Pistons are scoring just 109 per game.  The Pistons have struggled on the road ATS, posting a 3-7-2 record ATS.  Defensively the Rockets aren't as good as their offense, Houston ranks 24th in scoring defense.  The Pistons have an edge on offense, as Detroit has the best 3-point shooting percentage in the league.  Houston has the 15th ranked 3-point defense.  I'll take Detroit to cover, as I see the Pistons getting it done from  deep.  Final score prediction, Rockets will win but the Pistons cover, 115-111.