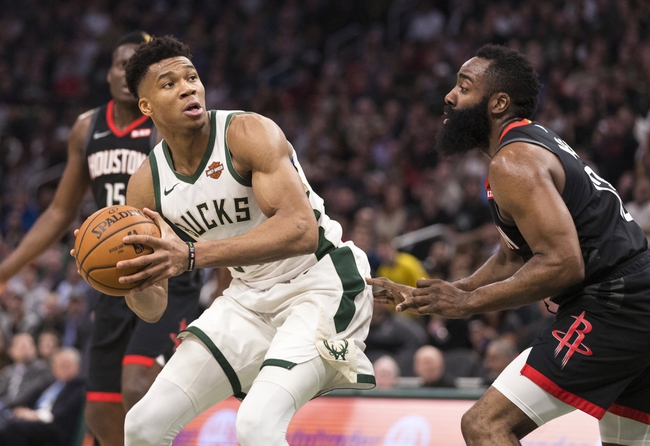 The Milwaukee Bucks are on the road for the first game of the season.  The Bucks travel to Houston, Tx to take on the Rockets.  The Bucks finished 1st place in the Central a year ago and had a record of (60-22).  The Houston Rockets enter this home contest, looking to start the season with a win.  The Rockets finished 1st in the Southwest and had a record of (53-29).

The Bucks are led by Giannis Antetokounmpo who last year averaged a double double(27.7ppg & 12.5rpg). The projected lineup for the Bucks is: Eric Bledsoe, Wesley Matthews, Khris Middleton, Antetokounmpo, and Brook Lopez.  Matthews who was acquired in the off season shot 37% from 3pt range.  Pat Connaughton and Ersan Ilyasova are expected to come off the bench.  Coach Mike Budenholzer will be starting his 2nd season with the Bucks.

Houston Rockets are hoping the dynamic duo of Russell Westbrook and James Harden will be able to lead the Rockets into a deep playoff run.  Besides Westbrook and Harden, Eric Gordon, P.J. tucker, and Clint Capela are expected to be in the starting lineup this season.  Austin Rivers and Gerald Green should be the first two off the bench.  Four of the five projected to be in the starting lineup averaged at least 16ppg last season.  Mike D'Antoni is entering his 4th season with the Rockets.

The Bucks were 8-4 ATS as an away underdog.

This matchup pairs two of the better teams together in each of their season opener.  While I think Antetokounmpo is the real deal and that the Bucks will be able to make a deep playoff run, I think the Rockets are more sound offensively.  The duo of Westbrook and Harden should carry this team at home in front of a sellout crowd.  Take the Rockets to cover this small home spread.  Final score prediction, Rockets win and cover 108-104.