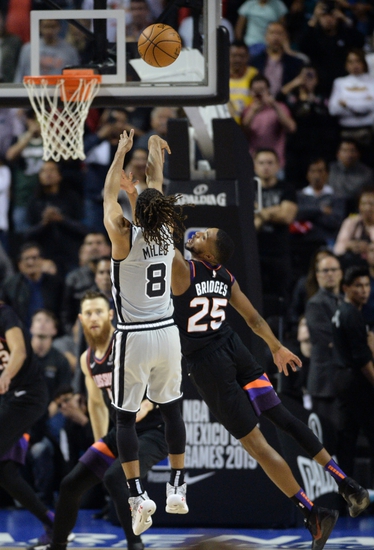 A rematch of the James Harden disallowed dunk game will take place on Monday when the San Antonio Spurs (10-15) visit the Toyota Center to take on the Houston Rockets (17-9). The previous protested game that the Spurs won 135-133 in double overtime was upheld by the NBA.

That double-overtime game started a streak of an NBA record four straight overtime games that the Spurs remain on heading into Monday’s game. After knocking off Houston, San Antonio edged Sacramento 105-104 in overtime, then lost an overtime game to Cleveland 117-109. The streak continued Saturday when the Spurs won 121-119 over Phoenix in Mexico City. That’s three wins in four games for San Antonio, its best streak since opening the season 4-1. However, the Spurs have been below .500 for 32 days this season, which is more than the 28 games below .500 they have been in the last 10 seasons combined.

In the win over Phoenix, Patty Mills hit a jumper with only 0.3 seconds left in the overtime period to give San Antonio the win. Mills led all scorers with 26 points off the bench, while DeMar DeRozan, Dejounte Murray, and LaMarcus Aldridge all scored 18 points. Aldridge and Murray also had seven rebounds. Lonnie Walker IV scored 16 points, and Rudy Gay added 10 points with 10 rebounds off the bench in the win.

Behind the tandem of Harden and Russell Westbrook, the Rockets established themselves to be one of the best in the NBA after jumping out to an 11-3 record, winning eight in a row to get to that record. But since that time, Houston is just 6-6 in its last 12 games and the Rockets have been unable to win more than two games in a row. Harden has maintained his status as the biggest scoring threat in the league, scoring 50 or more points in four of his team’s last eight games, leading his team to a 3-1 record in those games. The only game Houston lost when Harden scored 50 or more in those games was the 135-133 double-overtime loss to the Spurs.

In an interesting twist of the schedule, San Antonio has played just three games since that double-overtime win over Houston -- although all three went to overtime -- while Houston has played six games in that same time, with three of those games coming on the road.

Most recently, the Rockets lost to Detroit in Houston 115-107. Harden scored 39 but he did so on just 14-of-33 shooting from the field and 4-of-13 from 3-point range. He also had seven assists. Clint Capela had 12 points with 19 rebounds and Ben McLemore scored 13. Chris Clemons had a big game off the bench, scoring 17 points in just 16 minutes on 5-of-11 shooting from long range, and Austin Rivers also came off the bench for 14 points. Westbrook was held out of the game to rest, and Tyson Chandler missed his fifth game in a row with flulike symptoms. He is questionable to play on Monday.

The NBA season is long and it is clear that some teams take certain games off. It’s just the nature of the game. But don’t expect Houston to take this one off. Westbrook will be rested and Harden will want revenge for the controversial double-overtime loss suffered nearly two weeks ago. This will be a full-effort game for Harden and expect a big one from him. In addition, San Antonio is the worst team in the NBA in covering a spread, going 6-18-1 against the spread this season. For that fact alone, take Houston minus the big number in this game.