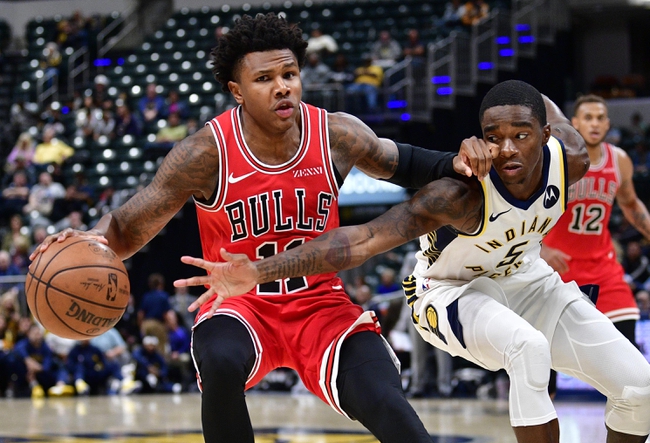 The Chicago Bulls hit the road for a matchup with the Indiana Pacers.  The Bulls come in with a record of (2-4) and are coming off a win against the Detroit Pistons, 112-106.  The Pacers have won their last 2 games, to improve their record to (2-3).  The Pacers enjoyed a win last time out, against the Cleveland Cavaliers at home, 102-95.

In the win over the Pistons, the Bulls were led in scoring by Zach LaVine.  LaVine shot 8 of 20 from the floor, while totaling 26 points and 3 assists.  Otto Porter Jr. was second on the team in points scored with 22 and also added 6 rebounds. The Bulls as a team shot almost 44% from the floor and 40% from 3 point range.  The Bulls were out scored in the paint by the Pistons 66 to 40 on the night.

The Pacers were guided by Malcom Brogdon in the win over the Cavaliers.  Brogdon netted 25 points on 8 of 16 shooting, while going 8 of 8 from the foul line.  Jeremy Lamb contributed a double-double in the win.  Lamb totaled 21 points and snagged 10 rebounds.  Domantas Sabonis added another double-double for the Pacers in the game.  Sabonis had 18 points, while pulling down a game high a game high 17 rebounds.  The Pacers made 19 of their 20 free throw attempts.

Bulls are 2-7 ATS in their last 9 games overall.

Pacers are 1-4 ATS in their last 5 Sunday games.

The Pacers have played solid basketball overall this year, minus their 2 losses vs the Detroit Pistons.  The Pacers have won 2 in a row and seem to have some kinks worked out.  The Bulls are 1-3 away from Chicago to start the season.  The Pacers have controlled this series, having won 8 of the last 10 games.  The home team has also been profitable in the last 6 meetings ATS in this matchup, going 5-1 ATS.  Final score prediction, Pacers win and cover 109-104.