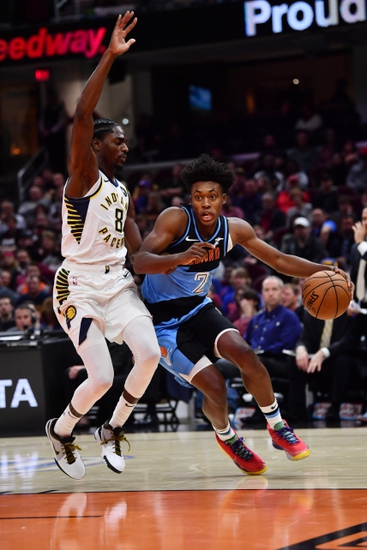 On Friday, the Cleveland Cavaliers head to Indianapolis for a game against the Pacers in a match up of two Eastern conference teams.  In their last game, the Cavs were victorious, defeating the Chicago Bulls 117-111.  Tristan Thompson led the way for the Cavs in points, scoring a total of 23 while shooting 11 of 19 from the field and 1 of 3 from the free throw line.  Kevin Love led Cleveland in rebounds with 20 as well as assists with 6.  Cleveland point guard Jordan Clarkson had a big game coming off the bench as he scored 17 points while also recording 4 assists.

The Cavs (2-2) enter their game against the Pacers looking to keep their momentum going and get above the .500 mark.  Cleveland is shooting 46 percent from the field during their first four games of the season.  Tristan Thompson leads the Cavs in points per game with 20.3 while also averaging 11.8 rebounds per game.  Kevin Love leads Cleveland in rebounds per game with 16.8 and assists with 5 per game while also averaging 16 points per game. John Henson and Ante Zizic are both listed on Cleveland’s injury report as out while Matthew Dellavedova is listed as day to day.

The Pacers enter Friday’s game against the Cleveland Cavaliers after a big win against a talented Brooklyn Nets team by the score of 118-108.  Domantas Sabonis led the Pacers in points with 29, while shooting 11 of 18 from the field and 5 of 6 from the free throw line.  Sabonis also led the Pacers in rebounds with 8, including 3 coming offensively.  Malcolm Brogdon led Indiana in assists in the game with 13.

The Pacers enter Friday’s game with a record of 1-3 and will be looking to climb closer to the .500 mark after a game with the Cavaliers.  The Pacers most productive player this season has Domantas Sabonis who leads the team in points per game with 22.8 and rebounds per game with 10 per game. Malcolm Brogdon is the leader of the Pacers in assists per game and is averaging 11.3 per game. On the Pacers injury report, Myles Turner and Edmond Sumner as both listed as out.