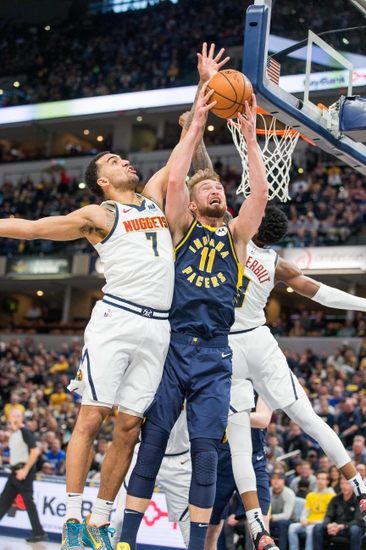 In the Nuggets loss to the Rockets, Denver was carried throughout the game by Nikola Jokic.  Jokic connected on 10 of 17 attempts from the floor, recording 21 points.  Paul Millsap added 13 points and 9 rebounds.  The Nuggets shot 46% from the floor and 32% from distance.  Denver took the loss, as the Nuggets had no answer for the Rockets 3-point shooting.  Denver gave up 16 3-pointers in the loss.

In the Pacers win over the 76ers, Indiana was led by Domantas Sabonis.  Sabonis converted on 10 of 16 attempts from the floor, making 2 foul shots, finishing with 23 points and 10 rebounds.  T.J. Warren contributed 21 points.  The Pacers shot 49% from the floor and 44% from 3-point range.  Indiana out scored Philadelphia in the paint, 54 to 46.  The Pacers connected on 11 3-pointers.  Indiana held the 76ers to 40% from the floor.

Nuggets are 1-4 ATS in their last 5 games against Indiana.

The over is 6-2 in Pacers last 8 games against Denver.

The Nuggets have been decent on the road, having gone 8-6.  However, the Pacers have been one of the best teams when at home.  Indiana is 15-3 when playing at home.  The Pacers have the 5th best scoring defense when at home, while the Nuggets are 19th on the road in scoring offense.  The Nuggets have the 3rd best scoring defense in the league when playing on the road.  Overall both teams have top 5 scoring defense's, this should be a slow paced game.  The over's have cashed quite nicely for both teams, but neither teams has been faced with an equal defense.  I like the under here.  Final score prediction, Pacers win and the total goes under,