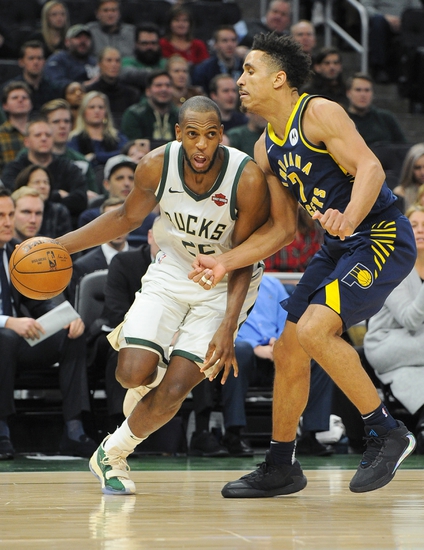 The Milwaukee Bucks travel to Indianapolis, IN on Wednesday for a game agains the Pacers in a matchup of two teams from the Central Division in the Eastern Conference.  In their last game, Milwaukee defeated the Sacramento Kings by the score of 123-111.  The Bucks were led in points by Khris Middleton who scored 28 points on the night while shooting 8 of 13 from the field and 2 for 2 from the free throw line.  Middleton also led Milwaukee in rebounds with 11, including 2 coming offensively.  Middleton was also the leader for the Bucks in assists on the night with 8 while playing a total of 34 minutes against the Kings.

The Indiana Pacers welcome the Milwaukee Bucks to town on Wednesday after losing their last game to the Brooklyn Nets by the score of 106-105.  Domantas Sabonis led the Pacers in points in the game with 23 while shooting 11 of 15 from the field.  Sabonis was also the leading rebounder for the Pacers as he pulled in 10 boards, with 1 coming offensively.  Sabonis also led Indiana in assists on the night with 11 while playing a total of 38 minutes in the game against the Nets.

The Pacers are now 31-23 on the season and in 2nd place in the Central Division.  The Pacers leading scorer is Domantas Sabonis who has scored an average of 18.3 points per game on the year.  Sabonis is also the leading rebounder this season for the Pacers as he has averaged 12.5 per game including an average of 3.1 offensive rebounds per game.  Malcolm Brogdon is the leader in assists for the Pacers as he has averaged 7.2 assists per game.  The Pacers enter their game on Wednesday with a clean bill of health as they do not have anyone listed on their injury report.