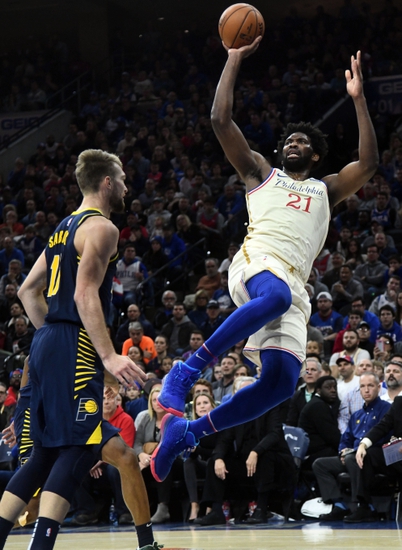 In the 76ers loss to the Heat, Philadelphia was led on offense by Joel Embiid.  Embiid connected on 11 of 16 from the floor, making11 foul shots, totaling 35 points and 11 rebounds.  Ben Simmons added a double-double, finishing with 15 points and 11 assists.  The 76ers shot 47% from the floor ad 33% from 3-point range.  Philadelphia out rebounded Miami, 57 to 55.  The 76ers out scored the Heat by 6 points in the 4th quarter to force OT.

In the Pacers loss to the Pelicans, Indiana was guided by Aaron Holiday.  Holiday connected on 7 of 14 attempts from the floor, making 7 foul shots, recording 25 points.  T.J. Warren contributed 20 points and 3 rebounds.  The Pacers shot 39% from the floor and 21% from distance.  Indiana lost the game from 3-point range, being dominated in 3-point makes.  The Pacers allowed 18 3-pointers, while the Pacers made just 6.

The over is 4-1 in Pacers last 5 games following a SU loss.

The 76ers have lost 2 in a row and have won 3 of their last 5, while the Pacers have lost 3 of 4.  The 76ers have struggled on the road, having gone 7-9, while the Pacers have done well at home, going 14-3. The Pacers are in the top 5 in home scoring defense.  The 76ers are allowing the 4th fewest points per game.  With both teams having solid defense's, the trends have showed the over has been profitable.  Both have been in some high scoring games as of late.  Final score prediction, Pacers win and the total goes over,  108-104.