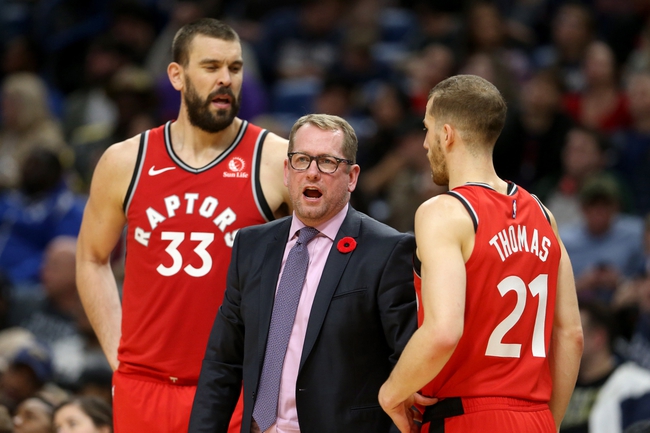 The Toronto Raptors head to Los Angeles on Monday for a game against the Clippers but first must play the Lakers also in LA on Sunday.  In the Raptors last game against the New Orleans Pelicans, Toronto won by the score of 122-104.  Pascal Siakam was huge on the night for the Raptors as he led the team in points and in rebounds.  Siakam scored 44 points while shooting 17 of 28 from the field and 5 of 5 from the free throw line.  Siakam also recorded 10 rebounds, including 3 offensively.  Fred VanVleet was the Raptors leader in assists as he recorded 11 on the night and also added 5 rebounds and 12 points.

On the year, the Raptors are now 6-2 on the season and are in 2nd place in the Atlantic Division. Pascal Siakam has led the Raptors in points so far this season as he is scoring 27.9 per game.  Siakam has also led Toronto in rebounds per game with 9.2.  Shooting guard Fred VanVeleet leads the Raptors in assists and is currently averaging 7.4 per game.  The Raptors come into Monday’s game against the Clippers with 3 players listed on their injury report as Patrick McCaw and Kyle Lowry are listed as out and Serge Ibaka is listed as day to day.

The Los Angeles Clippers welcome the Raptors to LA after winning their last game against the Portland Trail Blazers by the score of 107-101.  Kawhi Leonard led the Clippers in points on the night with 27 while shooting 9 of 23 from the field and 9 of 10 from the free throw line.  Leonard also led the Clippers in rebounds on the night with 12, with 1 coming on the offensive boards.  Lou Williams continues to play well for the Clippers and led the team in assists with 8 to go along with 3 rebounds and 26 points.

After the win against New Orleans, the LA Clippers are now 6-3 on the season and are currently in 2nd in the Pacific Division.  Kawhi Leonard has led the Clippers in points per game so far this season as he has scored 29 points per game.  Leonard has also led the Clippers in rebounding and has averaged 8.1 per game on the year.  Lou Williams leads LA in assists per game so far this season as he as averaged 5.8 points game.  The Clippers come into Monday’s game mostly healthy as they have just 1 players listed on their injury report as Paul George is listed as out.

The pick in this article is the opinion of the writer, not a Sports Chat Place site consensus.
Previous Pick
New Orleans Pelicans vs. Houston Rockets - 11/11/19 NBA Pick, Odds, and Prediction
Next Pick
Indiana Pacers vs. Oklahoma City Thunder-11/12/19 NBA, Odds & Prediction