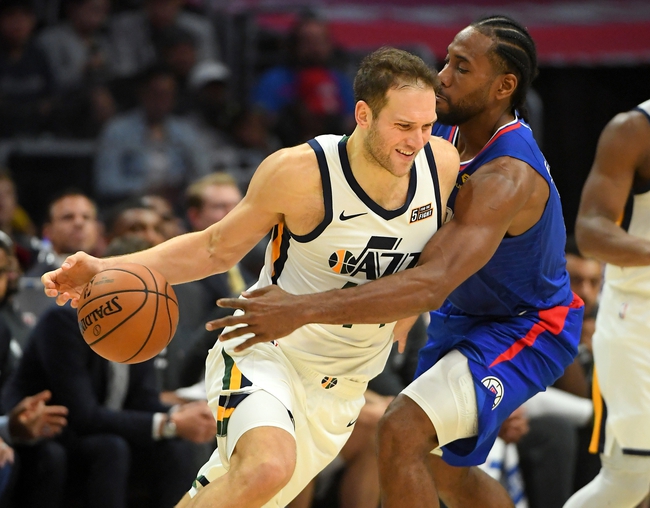 The Staples Center will be home of a conference battle between two of the premiere Western Conference teams, the Utah Jazz and the LA Clippers. The Clippers are fresh off a huge comeback win over the intown rival Lakers, winning the game 111-106 to improve their record on the season to 23-10. The Jazz won a game at home over the Portland Trailblazers 121-115 to improve to 19-12 on the year.

The Clippers are led by reigning finals MVP, Kwahi Leonard. Leonard leads the Clippers in both points with 25.9 and rebounds with 8. Leonard was signed in free agency over the summer by the Clippers along with another star, Paul George. George adds 23.9 points, 6 rebounds and 4 assists per game. The Clippers offense is considered one of the best in the NBA averaging 115.5 points per game which ranks 5th in the NBA this season.

The Utah Jazz are led in scoring by electric guard Donovan Mitchell who averages 25.1 points per game. Operating in the paint and defensive specialist Rudy Gobert leads the team in rebounding with 14.3 and adds 15 points. While forward Bojan Bogdonavic adds 21 points per night for the Jazz.

Utah is also one of the best defensive teams in the NBA allowing just 106.6 points per game to ranks 7th in the NBA.

The Clippers come in off an emotional Christmas Day victory over their rival and this is a major let down spot against a Western conference power. Behind Mitchell and Gobert, the Jazz will come out ready to play in a big game. Final score prediction, The Clippers win late in a close game, but the Jazz cover the spread with a final score of 109-105.