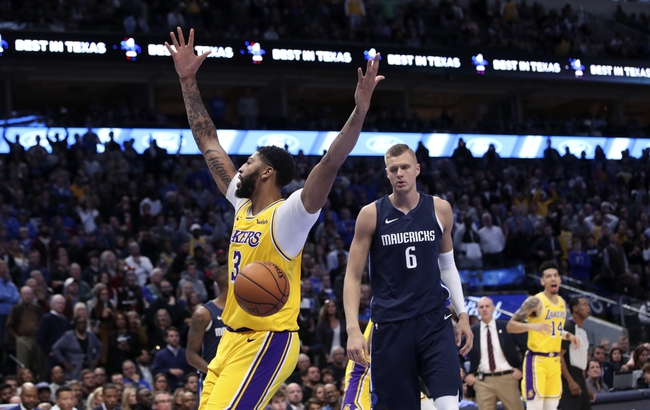 In the Mavericks win over the Suns, Dallas was led on offense by Luka Doncic.  Doncic connected on 12 of his 24 shots from the floor, while making 15 of 18 from the line, totaling 42 points.  Doncic also had 11 assists in the game, which gave him a double-double on the night.  The Mavericks shot 41% from the floor and 36% from deep.  Dallas won the game from the foul line, making 33 of 38 compared to the Suns 18 of 25.

In the Lakers win over the Wizards, Los Angeles was led in scoring by Anthony Davis.  Davis had a great game, recording a double-double.  Davis finished with 26 points and 13 rebounds.  LeBron James added 11 assists in the game.  The Lakers shot 51% from the floor and 43% from deep.  Los Angeles controlled the paint, out scoring the Wizards 56 to 36 inside the paint.  The Wizards led by 11 points in the game, while the Lakers biggest lead was 39.

Mavericks are 6-1 ATS in their last 7 games overall.

Mavericks are 5-1 ATS in their last 6 vs the Western Conference.

The over is 5-1 in Mavericks last 6 overall.

Lakers are 6-1 ATS in their last 7 Sunday games.

The Mavericks have struggled against the spread in this series, going 1-5 in the last 6 matchups.  The Mavericks have won 6 of their last 7 games overall.  The Lakers have won 10 in a row.  Los Angeles has been led by their defense, ranking 3rd in fewest point allowed.  The laker have plenty of scoring threats on offense and should be able to take advantage of the Mavericks 17th ranked scoring defense.  Dallas has a good offense as well, ranking 4th in points scored per game.  The two teams have met once this year, with the Lakers winning 119-110.  Final prediction, the Mavericks keep this close, but the Lakers win at home.