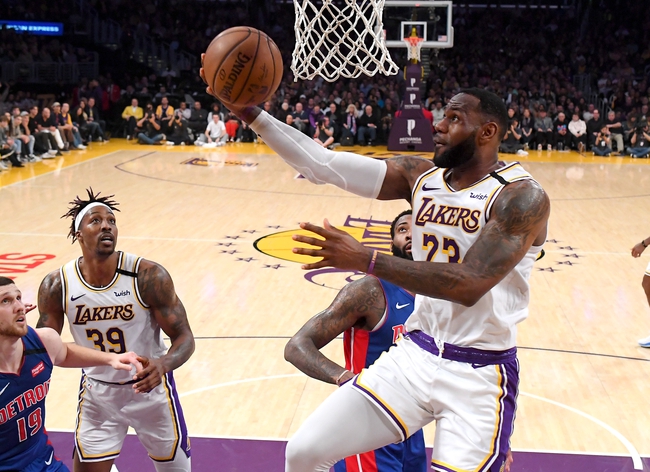 The New York Knicks travel cross country for a non-conference battle against the LA Lakers. The Lakers come in as one of the best teams in the NBA and have won their last five games most recently escaping with a victory over the Detroit Pistons, winning 106-99 to improve to 29-7 on the season. The Knicks have lost their last two games, most recently playing the elite LA Clippers tight and losing 135-132 to drop to 10-26 on the season.

The Lakers come in averaging 112.7 points per game on the season which ranks 8th in the NBA. Leading the Lakers is superstar duo of Lebron James and Anthony Davis. Lebron leads the NBA in assists with 11 per game while adding 24.9 points and 7.9 rebounds. Anthony Davis leads the team in scoring with 27.7 points and rebounds with 9.5 per game. The Lakers are very efficient as a team specifically from the paint averaging 53.4 points in the paint per game which ranks 2nd in the NBA and shoot an NBA best 48.2% from the field.

The Knicks average 104.7 points per game which ranks 27th in the NBA. The struggling Knicks offense has struggled this season shooting just 43.5% from the field and 34.9% from the three-point line. The key to the New York offense is offseason signing Julius Randle who averages 18.6 points and a team high 9.1 rebounds per game. Leading the Knicks in scoring is Marcus Morris Jr. who averages 19.1 points per game.

The Lakers boast a solid defensive unit as well holding opponents to 105.4 points per game while holding teams to 43.9 both which rank 6th in the NBA. The Lakers also rank 1st in the NBA in blocks per game, blocking 7.4 shots led by Anthony Davis who is averaging 2.6 blocks a game which ranks 3rd in the NBA.

The Knicks defense has held opponents to 111.8 points per game and hold opponents to 45.9% from the field. The Knicks does struggle to guard the perimeter allowing opposing teams to shoot 38.4% from beyond the arc which ranks 29th in the NBA.

The Lakers have struggled against the spread as of late posting a 2-8-1 record ATS in their last eleven games. The Knicks on the other side have been improving and have covered the spread in four of their last five games and are 19-17 ATS on the season. Final score prediction, The Lakers win but the Knicks cover the spread in a 113-107 game.