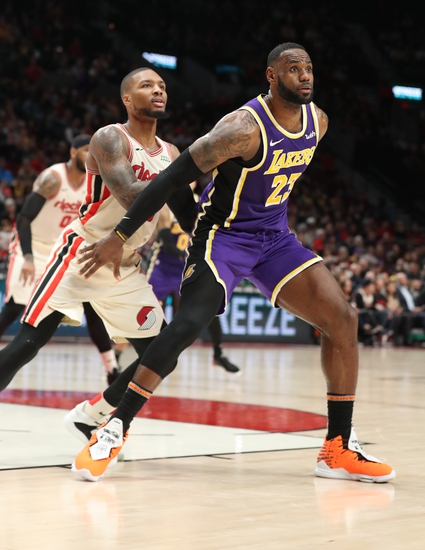 The Portland Trail Blazers travel to Los Angeles, CA on Friday for a game against the Lakers in a matchup of teams from the Western Conference.  In their last game, the Trail Blazers defeated the Houston Rockets by the score of 125-110.  Damian Lillard led the way for the Trail Blazers scoring 36 points while going 11 of 21 from the field and 8 of 10 from the free throw line. Lillard also led Portland in assists on the night with 11, while playing a total of 39 minutes against the Rockets.  Carmelo Anthony led the Trail Blazers in rebounds in the game with 13, including 2 coming offensively.

The Los Angeles Lakers welcome the Portland Trail Blazers to town on Friday after losing their last game to the Philadelphia 76ers by the score of 108-91.  Anthony Davis led the Lakers in points with 31 as he went 13 for 22 from the field and 3 of 4 from the free throw line.  Davis also led Los Angeles in rebounds with 7 in the game, with all of them coming defensively.  LeBron James led the Lakers in assists with 8 on the night while playing 35 minutes in the game.

After the loss against the 76ers, the Lakers are now 36-10 and are currently in 1st place in the Pacific Division.  Anthony Davis leads the Lakers in points per game with 26.5 and has played well alongside his new teammates all season.  Davis also leads the Lakers in rebounds as he is averaging 9.1 per game.  LeBron James may have taken a back seat to Davis in terms of points per game, but he is still leading Los Angeles in assists per game with 10.7.  The Lakers enter Friday’s game with a clean bill of health as they do not have anyone listed on their injury report.