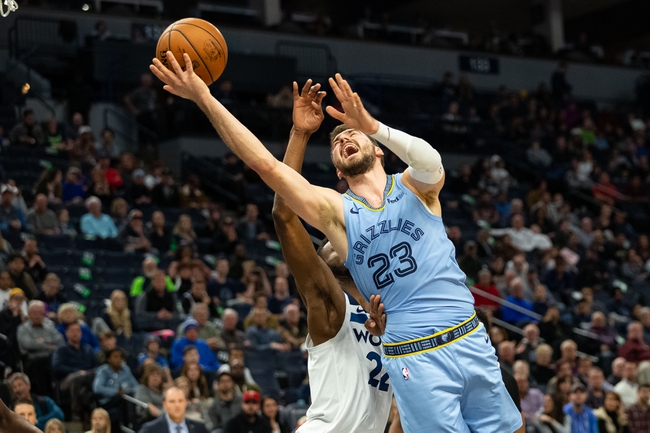 The Memphis Grizzlies (6-13) will attempt to start just their second win streak of the season on Monday when they host the Indiana Pacers (12-7) to FedExForum. Memphis ended a six-game losing streak on Sunday with a 115-107 win at Minnesota.

The losing streak for Memphis that was just broken was surprising in that five of those six games were played at FedExForum. But four of those losses were against the elite of the NBA -- Denver, the Lakers, the Clippers, and Utah -- along with a 126-114 loss at Indiana, which is one of the top teams in the East. The 19-point loss to Golden State at home, however, was the unacceptable loss of the six.

Defeating Minnesota was even more surprising considering who played for the Grizzlies -- or maybe better put, who didn’t play. Ja Morant, who leads all rookies in scoring at 18.6 points per game, did not play and is considered week-to-week with back spasms. Team leader in rebounds Jonas Valanciunas, who averages 13.6 points and 9.8 rebounds per game, missed due to illness, while key bench player Kyle Anderson, who scores 6.7 points with 4.4 rebounds in 20.5 minutes per game, did not play with his heel injury. In addition, Brandon Clarke made his first start of the season, but played just 10 first-half minutes and did not return with his hip injury.

That left it all up to Dillon Brooks, who led all scorers with 26 points on 4-of-5 shooting from 3-point range. It isn’t clear who will be available at this point for the game against Indiana, but watching Brooks is important as the Grizzlies are 5-0 when he scores 20 points or more. Grayon Allen came off the bench for 13 points while Jaren Jackson Jr., Jae Crowder, Tyus Jones, and Bruno Caboclo each scored 12 points. Crowder and Caboclo both had double-doubles with 10 and 13 rebounds respectively. De’Anthony Melton also scored nine points with eight assists and seven rebounds.

Indiana was on its third win streak of at least three games until Saturday when it dropped a narrow 119-116 decision at Philadelphia. Prior to that, the Pacers were on a season-best five-game win streak with victories over Brooklyn, Orlando, Memphis, Utah, and Atlanta. The Pacers had a great chance to win on Saturday and hand the 76ers their first loss of the season at home after leading 114-113 with possession and only 13.9 seconds to go in the game, but Ben Simmons had three steals in those final 13.9 seconds to lead the Sixers to the 119-116 win.

T.J. Warren led his team with 29 points in the loss on a perfect shooting night from 3-point range on four attempts, while Malcolm Brogdon added 28 points and six assists going 8-for-8 from the free-throw line. Jeremy Lamb scored 15 points with five assists, Domantas Sabonis had a double-double with 13 points and 10 rebounds with five assists, and Justin Holiday came off the bench for 10 points.

Breaking this one down isn’t easy, but the difference will likely be the teams’ defenses in the game. Indiana is the NBA’s eighth-best defense allowing 104.6 points per game, but the Pacers are even better on the road, ranking sixth in points allowed in road games. In contrast, Memphis has the league’s 27th best defense -- or fourth worst -- giving up 117.6 points per game, but it allows the second-most points among NBA teams in home games.

So go with Indiana minus the big number with the hopes that the Pacers will replicate their 12-point win over Memphis one week ago.