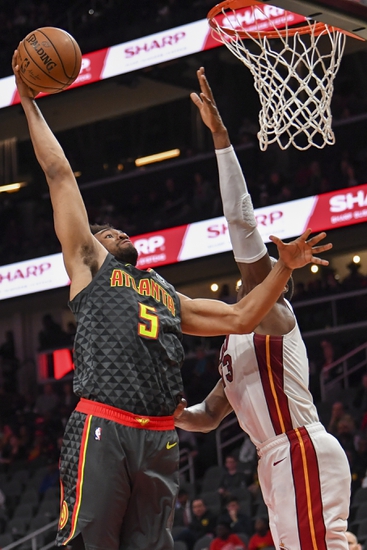 The Atlanta Hawks are in Miami on Tuesday for a game against the Heat in a matchup of teams at opposite ends of the Southwest Division.  In their last game, Atlanta defeated the Charlotte Hornets by the score of 122-107.  Trae Young led the Hawks in points against the Hornets, scoring 30 points while shooting 9 of 20 from the field and 8 of 8 from the free throw line.  Alex Len led Atlanta in rebounds as he pulled in 10 on the night, including 5 offensively.  Trae Young led the Hawks in assists as he recorded 9 in the 36 minutes that he played in the game.

After the win, Atlanta is now 6-17 on the season and are currently in 5th place in the Southeast Division.  Trae Young leads the Hawks in points per game on the year and is scoring 28.8 per game.  Young is also Atlanta’s leader in assists per game and is averaging 8.4.  Jabari Parker is leading Atlanta in rebounds per game on the season as he is averaging 6.3 rebounds per game.  Atlanta enters their game on Tuesday with just 1 players listed on their injury report as Alex Len is listed as day to day.

The Miami Heat welcome the Atlanta Hawks to town on Tuesday, looking to add another win to their record against a divisional opponent.  In their last game Miami defeated the Chicago Bulls by the score of 110-105 in overtime.  Tyler Herro led the Heat in points with 27, while shooting 10 of 22 from the field and 2 of 2 at the free throw line. Bam Adebayo led the Heat in rebounds on the night, recording 13 including 4 offensively.  Jimmy Butler led Miami in assists on the night, recording 7 in the 44 minutes that he played in the game.

With the win against Chicago, the Heat are now 17-6 on the season which places them in 1st place in the Southeast Division. Jimmy Butler leads the offense in points per game and is averaging 20.6 per game.  Butler also leads the Heat in assists per game with 6.8.  Bam Adebayo leads the Heat in rebounds per game on the season as he is averaging 10.5 per game.  The Heat come into Tuesday’s game with 4 players listed on their injury report as Justise Winslow and Dion Waters are listed as day to day while KZ Okpala and Goran Dragic are all listed as out.

The Hawks have scored an average of 108.7 points per game while allowing an average of 117.3 points per game.  The Heat have scored 111 points per game while allowing 105.5 points per game.  In their last 5 games, the Hawks are 2-3 while the Heat are 4-1 and have won 2 games in a row.  Miami has won both games between these two teams this season, winning 106-97 in Atlanta and 112-97 in Miami.  I am going to go with the Heat in this one as they have been the better team all season, are already 2-0 against the Hawks this season and are currently 10-0 at home this year while the Hawks are 3-9 when playing on the road.  Miami wins 118-106 and covers the spread.