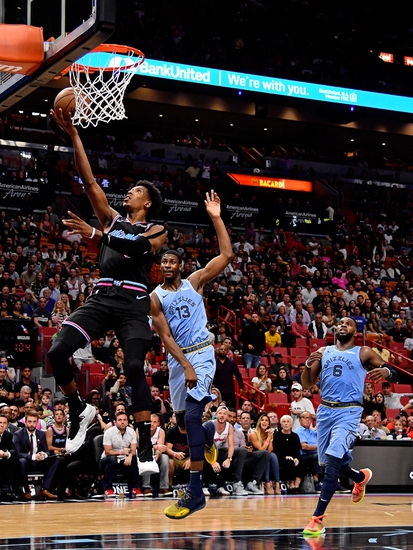 The Grizzlies are hoping that talented point guard and high draft pick Ja Morant will be able to make a difference right away. Morant played college ball at Murray State.  The projected lineup besides Morant is: Dillon Brooks, Kyle Anderson, Jaren Jackson Jr, and Jonas Valanciunas.  Valanciunas averaged almost 16 points per game last season, to go along with a 56% field goal success rate. Jae Crowder should be one of the first off the bench for the Grizzlies. Coach Taylor Jenkins is entering his first season with the Grizzlies.

When looking at the Miami Heat, the Heat are projected to roll out a lineup of: Goran Dragic, Dion Waiters, Jimmy Butler, Kelly Olynyk, and Bam Adebayo.  The Heat are hoping that Butler will bring his veteran leadership and will be able to jumpstart this offense that finished 4 games below 500 a year ago.  Butler averaged almost 19 points per game and Olynyk averaged 10 points per game last year. Erik Spoelstra will be starting his 12th season with the Heat.

The under was 22-13 when the Grizzlies were an away underdog.

Both teams are hoping to be better then last season and both made some key additions in the off season.  I think Ja Morant will have the biggest impact out of anyone added by either team.  While the Heat will more then likely win this game down the stretch, the Grizzlies should keep this game close the whole way.  Morant's athleticism and ability to get all of his teammates involved will be a reason the Grizzlies cover the spread here.  Final score prediction, Heat win but the Grizzlies cover 107-102.