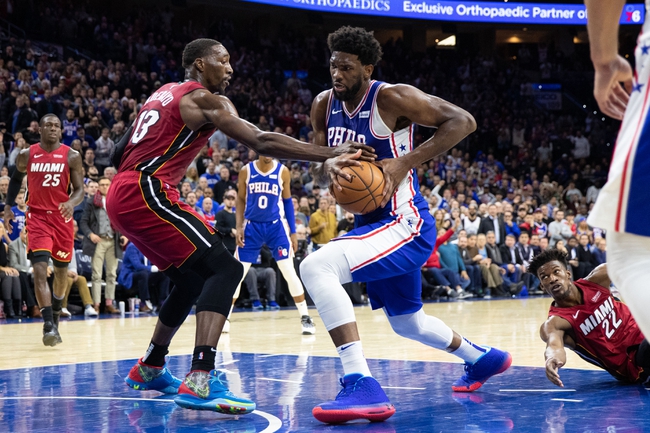 The Philadelphia 76ers head to Miami to play the Miami Heat on Saturday at the American Airlines Arena. The 76ers are coming off a huge victory over the Milwaukee Bucks, crushing Giannis Antetokounmpo and the Bucks on Christmas Day. The game was a huge moment offensively and defensively for Joel Embiid, who was terrific against Antetokounmpo.

The 76ers are 23-10 and one of the best teams in the Eastern Conference at the moment. The 76ers face back to back games, playing the Orlando Magic before taking on the Heat on Saturday. Currently, the Sixers are on a three-game winning streak before their run of games in Florida.

The Miami Heat are on a three-game winning streak of their own, and in their winning streak includes the Philadelphia 76ers. The Heat exposed the Sixers defensively last game, and Jimmy Butler got his revenge on the Philadelphia fans that booed him, as they were upset he wanted to be traded in the offseason. The Heat also faces back to back games, playing the Pacers before taking on the 76ers.

The Miami Heat are 22-8 and might be the most improved team in all of the East. The Heat now has two legitimate all-stars on their roster with Jimmy Butler and Bam Adebayo. Butler leads the team in points with 20.4 points per game, and Adebayo leads the team in rebounds with 10.6 rebounds per game.

The Miami Heat got the last laugh last game as fans ran down boo’s towards the former Sixer Jimmy Butler. However, this game feels more intense as Miami has cemented themselves as one of the best teams in the East, along with the 76ers. If the 76ers play as they did against Milwaukee, Miami won’t stand a chance. I think Philly does continue their excellent run of form and edges out a win against Miami. Final Score Prediction, Philadelphia 76ers win 116-111.