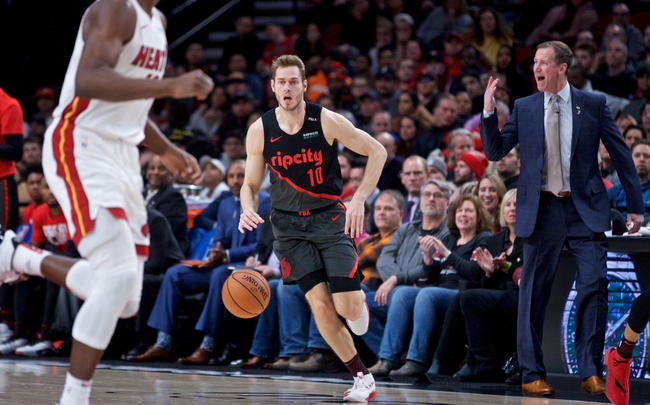 In the Trail Blazers win over the Wizards, Portland was guided by Hassan Whiteside.  Whiteside had a tremendous game, securing a double-double, finishing with 23 points and 21 rebounds.  Defensively, Whiteside also had 5 blocked shots.  Portland shot 51% from the floor and 24% from 3-point range.  The Trail Blazers were able to pull away, thanks to out scoring the Wizards at the charity stripe, 26 to 16.  Portland scored 62 points in the paint, compared to the Wizards 42.

In the Heat loss to the Magic, Miami was led offensively by Jimmy Butler.  Butler contributed a double-double, recording 23 points and 10 rebounds.  Miami struggled from the floor, connecting on just 38% from the floor and 19% from distance.  Miami saw Orlando convert on 13 3-pointers, which did not help the Heat cause throughout the game.  Miami committed 18 turnovers, which led to 24 points for the Magic.

Trail Blazers are 1-5 ATS in their last 6 games.

Trail Blazers are 5-2 ATS in their last 7 games against Miami.

The over is 4-1 in Trail Blazers last 5 games when at Miami.

The Heat have been the best team when playing at home, having gone 16-1 to this point.  The Trail Blazers are 7-12 on the road this season.  Portland ended its 5 game losing streak, with the win over Washington.  The Trail Blazers have had some tough luck, as the Trail Blazers injured list seems to be growing.  The Heat have won 6 of their last 8 games.  Portland has the 9th best scoring offense in the league and the best free throw percentage.  Miami is averaging over 110 points per game, while Portland gives up nearly 114 per contest.  Seeing the Heat are 11-5-1 ATS and that Portland is not profitable ATS on the road, I'll side with Miami to cover.  Final prediction, Heat will win and cover.