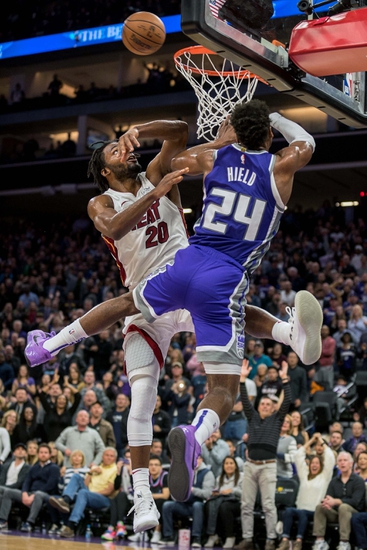 The Sacramento Kings travel to Miami, FL on Monday for a game against the Heat in a matchup of teams from the Western and Eastern Conference.  In their last game, the Kings were defeated by the Utah Jazz by the score of 123-101.  De’Aaron Fox was the main offensive weapon for the Kings as he led the team in points with 21 while shooting 10 of 16 from the field and 1 of 3 from the free throw line. Fox was also the leader in assists for the Kings as he recorded a total of 8 while playing 31 minutes in the game.  Marvin Bagley III was the leading rebounder on the night for Sacramento as he pulled in 7 boards with 3 coming offensively.

With the loss to the Jazz, the Kings are now 15-27 and are currently in 4th place in the Pacific Division. Buddy Hield is leading Sacramento in points per game on the season with 20.1.  Bogdan Bogdanovic is leading the Kings in assists per game on the season with 3.6 on the year.  Richaun Holmes has been the Kings leader in rebounds per game with 8.5.  The Kings enter Monday’s game with 1 player listed on their injury report as Marvin Bagley III is listed as day to day.

The Miami Heat welcome the Sacramento Kings to town on Monday after winning their last game by the score of 115-108 against the Oklahoma City Thunder.  Kendrick Nunn led the Heat in points with 22, while shooting 9 of 17 from the field and 1 of 1 at the free throw line. Jimmy Butler led the Heat in rebounds on the night, recording 10 with 2 coming offensively.  Butler also led the Heat in assists in the game with 7 while playing a total of 34 minutes against the Thunder.

With the win against the Thunder, the Heat are now 29-12 on the season which places them in 1st place in the Southeast Division. Jimmy Butler leads the offense in points per game and is averaging 20.3 per game.  Butler also leads the Heat in assists per game with 6.4.  Bam Adebayo leads the Heat in rebounds per game on the season as he is averaging 10.4 per game.  The Heat come into Monday’s game with 3 players listed on their injury report as Justise Winslow is listed as out while Kyle Alexander and Tyler Herro are day to day.

The Sacramento Kings have scored 106.6 points per game this season while allowing 109.9 points per game.  The Miami Heat have scored 111.6 points per game on the year while allowing 107.8 points per game.  In their last 5 games, the Kings are 1-4 and have lost 4 games in a row while the Heat are 3-2 and have won 2 games in a row.  The Kings have won the last 3 meetings against the Heat, winning by the average score of 116-109.33 but I look for this to turn around as the Heat are a much improved team than what they have been in the last couple years.  The Kings are 7-14 when playing on the road this season while the Heat are 18-1 at home.  I will be going with the Heat in this one.  Miami wins 115-105 and covers the spread.