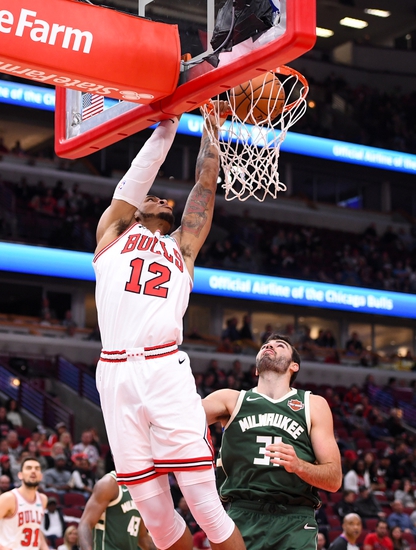 The Bulls head to Milwaukee on Thursday for a game against the Bucks after winning their last game by the score of 120-102 against the New York Knicks.  Coby White led the Bulls in points on the night with 27 while shooting 8 of 14 from the field and 4 of 4 from the free throw line.  Wendell Carter Jr. led the Bulls in rebounds with 12, with 4 coming offensively.  Ryan Arcidiacono led Chicago in assists on the night with 8 on the night.

The Bulls enter Thursday’s game with a record of 4-7 and are currently sitting in 4th place in the Central Division.  Zach LaVine has been the Bulls leading scorer on the year and is averaging 20 points per game.  Wendell Carter Jr. has been Chicago’s leading rebounder as he as averaged 9.7 rebounds per game.  Tomas Satoransky has led the Bulls in assists per game on the year and is averaging 5.2 assists per game.  The Bulls enter Thursday’s game with 3 players listed on their injury report as Cristiano Felicio is listed as out while Otto Porter Jr. and Zach LaVine are listed as day to today.

The Milwaukee Bucks welcome the Chicago Bulls to town after winning their last game, which was against the Oklahoma City Thunder, by the score of 121-119.  In their game against the Thunder, Giannis Antetokounmpo was in his usual MVP form as he led the Bucks in points scoring 35 on the night while shooting 13 of 19 from the field and 7 of 9 from the free throw line.  Antetokounmpo also led the Bucks in rebounds as he was a monster on the boards all night recording 16 rebounds with 2 coming offensively.  Eric Bledsoe led Milwaukee in assists as he dished out 9 on the night in the 29 minutes that he played.

On the year, the Milwaukee Bucks are now 7-3 and are currently in 1st place in the Central Division.  Giannis Antetokounmpo leads the Bucks in points per game with 29.7, rebounds per game with 14.3 and assist per game with 6.8.  Looking at the team stats, it’s clear that in order for the Bucks to be successful, Antetokounmpo has to be the lead man for Milwaukee.  The Bucks enter Thursday’s game with 2 players listed on their injury report as Kyle Korver is listed as day to day while Khris Middleton is listed as out.