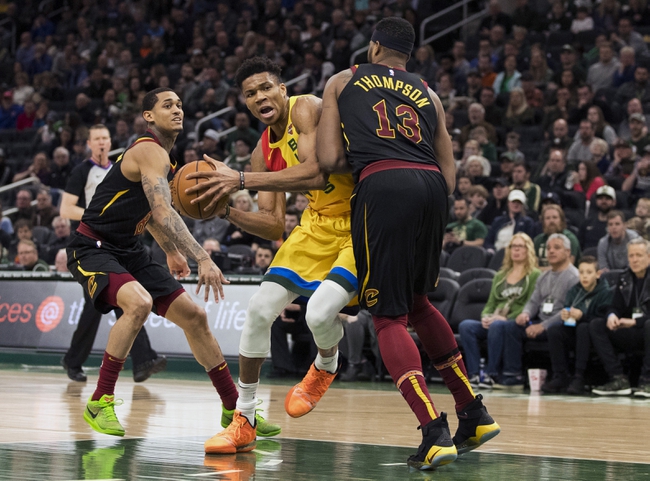 In one of the most surprising games of the young NBA season thus far, the Cleveland Cavaliers beat the Indiana Pacers on Sunday, 110-99.  Coming into Monday’s game against the Bucks, the Cavs are 1-1 after struggling against Orlando but looking strong against Indiana.  Cleveland’s scoring output was led by Tristan Thompson who scored 25 points and had 13 rebounds to his credit which were both team highs.  Kevin Love also played a good game, recording 9 assists which was a team high.  Rookie Darius Garland had a decent game and it looks as if the fifth overall pick from this year’s draft is adjusting well to the league as he scored 12 points and helped his team by recording 4 assists.

The Cavs enter their game against the Bucks looking to keep their momentum going and getting above the .500 mark.  Cleveland is shooting 43.5 percent in field goals during their first two games and need a lot more production from the offensive end of the court if they want to improve on last year’s record.  It looks as if the Cavs will be without Dylan Windler once again on Monday as he is listed as out on the team’s injury reports while power forward John Henson is listed as day to day.

The Milwaukee Bucks (1-1) welcome the Cavaliers into town on Monday after a loss to the Miami Heat on Saturday by the final score of 131-126 in overtime.  The Bucks received another strong game from their star and last year’s MVP Giannis Antetokounmpo who led the team in points with 29 while going 12 of 21 from the field and 5 of 9 from the free throw line.  Antetokounmpo also led the Bucks in rebounds with 17 and assists with 9.  However, Antetokounmpo fouled out for the second straight game with 2:31 left to play in overtime, and his absence certainly helped the Miami offense pull off the win on the road.

The Bucks will look to continue their offensive production against the Cavs.  All five starters scored in double digits for Milwaukee in their game against Miami.  Coming into the game against the Cavs on Monday, the Bucks are shooting 45.1 percent from field goal range.  Although the Bucks have a talented roster, Antetokounmpo must stay out of foul trouble as the Bucks are a completely different team without their star player.

Let us be honest here, although the Cavs beat a good Indiana team in their last game, I don’t think they are good enough to compete.  I really don’t think there is anyone out there who can see them winning more than 25 games this year at the most. The Bucks on the other hand are coming off a season where they had the best record in basketball during the regular season before losing to the eventual champion Toronto Raptors in the Eastern Conference finals.  Antetokounmpo will be an unstoppable force against the Cavs defense and this one won’t be close. Bucks win 125-112 but do not cover the spread.