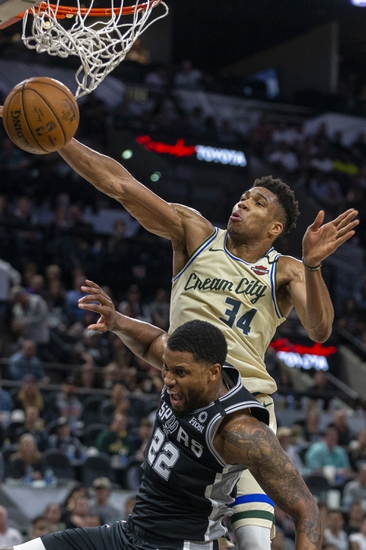 Bucks at Warriors Click to Get Latest Betting Odds

The Milwaukee Bucks travel to the Chase Center to take on the battered Golden State Warriors. Golden State has lost five straight games most recently losing to the Sacramento Kings losing 111-98 in a game Coach Steve Kerr was ejected both due to officiating and a lack of effort from his players. The loss dropped the Warriors to 9-29 on the season. Milwaukee lost their last game, a rarity this season for the Bucks who have a 32-6 record. The loss came to the hands of the San Antonio Spurs 126-104.

The Bucks boast one of the best offenses in the NBA averaging 119.2 points per game which ranks them 2nd in the NBA in scoring offense while shooting 48.1% from the field. The Bucks have dominated teams averaging a 11.9 score margin which ranks 1st in the NBA. Leading the Bucks is reigning MVP Giannis Antetokounmpo who leads the Bucks in all three major categories with 30.2 points, 12.8 rebounds and 5.6 assists per game while shooting a highly efficient 55.3% from the field.

The injury bug has bitted the Warriors extremely viciously this season with Steph Curry and Klay Thompson missing significant time and now offseason signing D’Angelo Russel missing this game against the Bucks. Golden State has averaged 105.1 points per game to rank 26th in the NBA in points per game and has shot an abysmal 43.1% from the field and 33.4% from the three point line which both rank near the bottom of the NBA. Leading the Warriors in scoring is Alec Burks who has averaged 15.8 points per game. The leader in rebounder and assists is Draymond Green who averages 5.6 assists and 6.3 rebounds per game while adding 9 points per game.

The Bucks have been an excellent team to bet this season with a 21-17 record against the number on the season and a 13-6 ATS record in their last nineteen games. The Warriors bring in a 17-20-1 record ATS and have covered the spread just once in their last five games. Final score prediction, if this matchup happened a year ago, it would be a premier likely back and forth game between two of the best teams in the NBA, this year the Bucks bounce back off a loss and win and cover the spread.