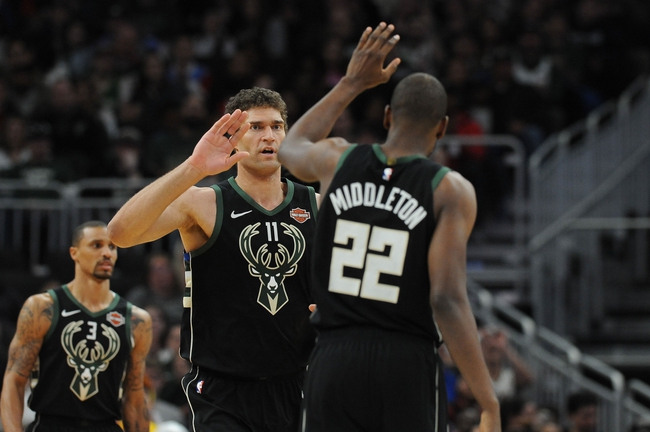 The Heat were led in scoring by Justice Winslow with 27 points.  Winslow had 27 points on 10/21 shooting, while adding 7 rebounds and 7 assists.  Kendrick Nunn who went un drafted scored 24 points in the win. As a team, the Heat made 84% of their free throws.  Defensively, the Heat held the Grizzlies to 15% from 3 point range on 32 attempts.

In the win over the Rockets, the Bucks saw 7 players finish with at least 10 points.  Giannis Antetokounmpo had a triple-double in the game, scoring 30 points, dishing out 11 assists, and grabbing 13 rebounds.  Wesley Matthews added 14 points in the game. Ersan Ilyasova contributed a double-double off the bench. The Bucks as a team had 31 assists in the win.

Milwaukee has won the last 3 matchups against the Heat and have covered the spread in all 3 of those games.  The Bucks also opened the season with an impressive road win over Houston.  Miami enters this contest without Jimmy Butler and Dion Waiters.  With the Heat missing those two players, the Heat will most definitely be shorthanded, especially with Butler out. With as talented as the Bucks are, the Bucks should have no problem covering the spread here.  Final score prediction, Bucks win and cover 121-103.