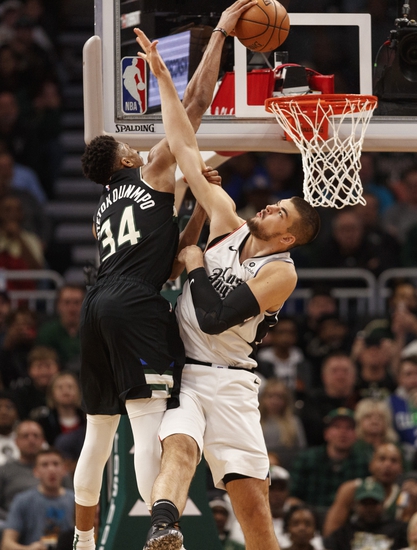 Two of the three hottest teams in the NBA will face off on Monday when the Orlando Magic (11-11) travels to Fiserv Forum in Milwaukee to take on the Bucks (20-3). While the Bucks are on a roll, winning 14 games in a row, Orlando is on a season-best four-game win streak. Dallas is the only other team on a better current win streak at five.

Milwaukee has been simply unstoppable on this current win streak and the Bucks have won 18 of their last 19 games. The lone blemish was a 103-100 loss at Utah on Nov. 8, more than a month ago. In that 14-game win streak, the Bucks’ average winning margin is 16.6 points per game, and over their last four games, they are winning by an average of 34.3 points per game. The 2019 MVP Giannis Antetokounmpo has, of course, led Milwaukee setting a team-high in scoring in 20 out of 23 games this season and in rebounds in 22 out of 23 games in 2019-20.

Milwaukee showed its dominance on Antetokounmpo’s 25th birthday on Friday, leading by as many as 41 points before settling for a 119-91 win over the LA Clippers. Antetokounmpo led all scorers in the game with 27 points and added 11 rebounds in the win, while Khris Middleton led five other scorers in double figures with 17 points on 7-of-9 shooting from the field. Ersan Ilyasova came off the bench to score 13 points in just 10 minutes, and Pat Connaughton also scored 13 points off the bench. Donte DiVincenzo also scored 13 points and Eric Bledsoe added 10. The Bucks held LA to 35.1 percent shooting from the field and 25.0 shooting from 3-point range.

Orlando might not be dominant like the Bucks, but it has still seen some recent success in a modest four-game win streak. The Magic has also won five of six games for easily their best stretch of the season, bringing their season up to .500 at 11-11. All but the 128-114 win over Phoenix have been by less than eight points and the wins were against teams with a combined record of 27-62, but it is a win streak nonetheless.

Terrence Ross led his team in scoring for the second game this season to lead the Magic to a 93-87 win at Cleveland on Friday night. Ross led all scorers off the bench, scoring 21 points in only 27 minutes, three points better than Evan Fournier’s 18 points. Aaron Gordon added 14 points and D.J. Augustin scored 10 points with seven assists despite shooting just 2-of-10 shooting from the field.

Incredibly, the Magic’s win streak has come without Nikola Vucevic who remains out with a severely sprained ankle. He averages 17.1 points with 11.6 rebounds per game.

Can anyone actually bet against Milwaukee right now? Throw all the trends out the window and use common sense here. The Bucks have won four in a row by more than the 11.5 points they are laying here, and one of those wins was against the Clippers, which is also one of the best defensive teams in the league. Milwaukee is flying high, and common sense says to continue taking the Bucks until someone stops them. Go with Milwaukee in this one.