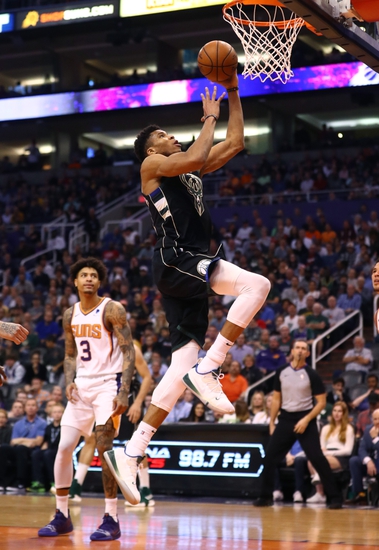 The Phoenix Suns travel to Milwaukee, WI on Sunday for a game against the Bucks in a matchup of teams from the Western and Eastern Conference.  In their last game, the Suns were defeated by the Oklahoma City Thunder by the score of 111-107.  Kelly Oubre Jr. led the Suns in scoring as he recorded 27 points on the night while shooting 8 of 15 from the field and 7 of 9 from the free throw line.  Oubre Jr. was also the Suns leading rebounder in the game as he pulled in 11 boards, including 2 coming offensively.  Ricky Rubio was the leader in assists in the game for Phoenix with 7 while playing a total of 30 minutes against the Thunder.

After the loss to Oklahoma City, Phoenix is now 20-28 on the season and in 3rd place in the Pacific Division.  Devin Booker has been the leading scorer for the Suns this season as he has averaged 27.1 points per game.  Kelly Oubre Jr. has been the leading rebounder on the season for Phoenix, averaging 6.6 rebounds per game.  The Suns leader in assists is Ricky Rubio with an average of 8.8 assists per game.  The Suns enter Sunday’s game with 1 player listed on their injury report as Dario Saric is listed as day to day.

The Milwaukee Bucks welcome the Phoenix Suns to town on Sunday after losing their last game to the Denver Nuggets by the score of 127-115.  As is the norm for the Milwaukee Bucks their team was led by Giannis Antetokounmpo who scored 31 points on the night while shooting 11 of 27 from the field and 8 of 12 from the free throw line.  Antetokounmpo also led Milwaukee in rebounds with 16, including 5 coming offensively.  Antetokounmpo also led the Bucks in assists on the night with 9 while playing a total of 32 minutes against the Nuggets.

On the year, the Milwaukee Bucks are now 41-7 and are currently in 1st place in the Central Division.  Giannis Antetokounmpo leads the Bucks in points per game with 30 and in rebounds per game with 13.  Antetokounmpo also leads the Bucks in assists per game as he has averaged 5.7 so far this season.  The Bucks enter Sunday’s game against the Suns with 4 players listed on their injury report as Frank Mason III and George Hill are out while Donte DiVincenzo and Giannis Antetokounmpo are listed as day to day.