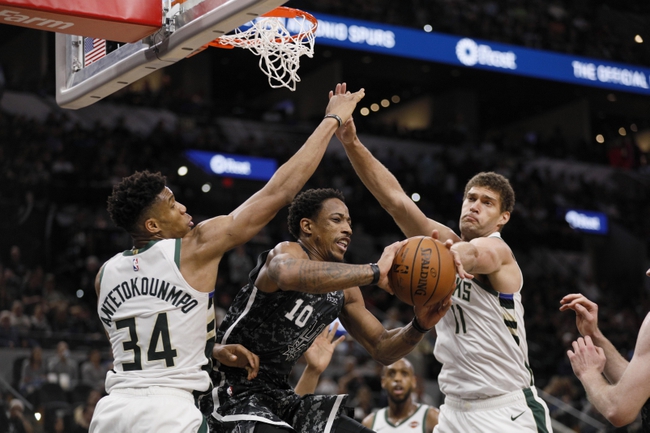 The San Antonio Spurs head to Milwaukee, WI on Saturday for a game against the Bucks in a contest between teams from the Eastern and Western Conference.  In their last game, the Spurs were defeated by the Oklahoma City Thunder by the score of 109-103.  DeMar DeRozan led the Spurs in points, scoring 30 while shooting 13 of 25 from the field and 3 of 3 from the free throw line.  LaMarcus Aldridge led the Spurs in rebounds with a total of 11 on the night, including 4 coming offensively.  Derrick White led San Antonio in assists in the game with 5 while playing a total of 26 minutes against the Thunder.

San Antonio is now 14-19 on the season and are currently in 3rd place in the Southwest Division.  DeMar DeRozan leads the Spurs in points per game with 21.5. DeRozan is also leading San Antonio in assists per game as he is averaging 4.9.  LaMarcus Aldridge has been the Spurs most productive rebounder and has averaged 7.8 per game this season.  The Spurs come into Saturday’s game with a clean bill of health as they do not have anyone listed on their injury report.

The Milwaukee Bucks welcome the San Antonio Spurs to town on Saturday looking to stay hot.  In their last game, the Bucks defeated the Minnesota Timberwolves by the score of 106-104.  As is the norm for the Milwaukee Bucks their team was led by Giannis Antetokounmpo who scored 32 points on the night while shooting 13 of 22 from the field and 3 of 8 from the free throw line.  Antetokounmpo also led Milwaukee in rebounds with 17, including 3 coming offensively.  Antetokounmpo also led the Bucks in assists on the night with 4 while playing a total of 31 minutes against the Timberwolves.

On the year, the Milwaukee Bucks are now 31-5 and are currently in 1st place in the Central Division.  Giannis Antetokounmpo leads the Bucks in points per game with 30.4 and in rebounds per game with 13.  Antetokounmpo also leads the Bucks in assists per game as he has averaged 5.6 so far this season.  The Bucks enter Saturday’s game against the Spurs with 1 player listed on their injury report as Wesley Matthews is listed as day to day.