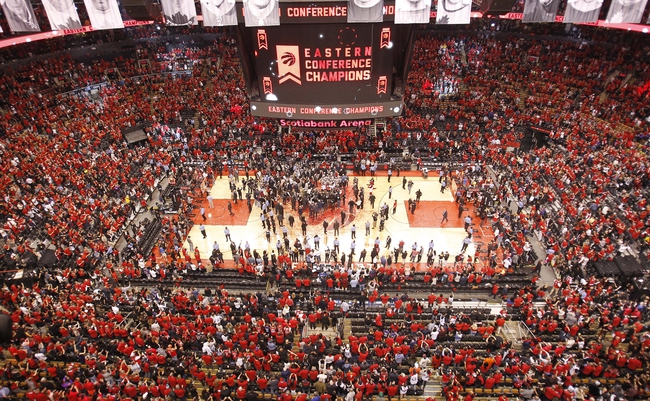 The defending NBA champion Toronto Raptors are in Milwaukee for a battle with the Bucks on Saturday.  In their first game the Raptors defeated the Detroit Pistons by the score of 125-113. Toronto received high levels of offensive production from multiple players on their way to the victory.  Pascal Siakam scored 30 points with 5 assists and 5 rebounds.  Fred VanVleet led the Raptors in assists with 11 while scoring 12 points. The Raptors leading rebounder on the night was O.G. Anunoby who had 8 rebounds on the night and also added 13 points and 2 steals.

On the year, the Raptors are 4-1, good enough for 2nd in the Atlantic division.  Siakam leads the Raptors in points per game with 28 and rebounds per game with 9.2.  Toronto’s leader in assists per game is VanVleet who is averaging 7.2.  The Raptors come into Saturday’s game pretty healthy, as small forward Patrick McCaw is the only player listed on the team’s injury report.

The Milwaukee Bucks head home for their game against the Raptors on Saturday, but first must go to Orlando on Friday for a battle with the Magic.  In their last game the Bucks were defeated by the Boston Celtics by the score of 116-105.  In their game against the Celtics, Khris Middleton led the team in points with 26 while going 8 of 12 from the field. Of course, no Milwaukee stat line is complete without Giannis Antetokounmpo, who led his team in rebounds with 14 and assists with 5, while recording 22 points.

On the year, the Milwaukee Bucks are now 2-2 and have been impressive offensively all season. Giannis Antetokounmpo leads his team in points per game with 23.8, rebounds per game with 13.5 and assists per game with 8. Milwaukee only has one player listed on the injury report, as Kyle Korver is listed as day to day.