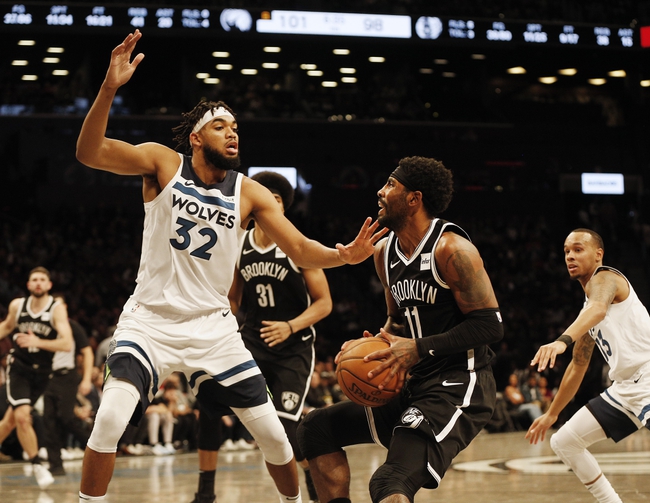 The Brooklyn Nets head to Minneapolis, MN on Monday for a game against the Timberwolves after losing their last game by the score of 108-98 against the Houston Rockets.  Spencer Dinwiddie led the Nets in points in the game against the Rockets, scoring 17 while shooting 6 of 20 from the field and 5 of 11 from the free throw line.  Dinwiddie also led the Nets in assists as he recorded 11 while playing 33 minutes on the night.  Deandre Jordan was the Nets leading rebounder in the game as he recorded 12 boards including 4 offensively.

With the loss against Houston, the Brooklyn Nets are now 16-15 on the season, which places them in 4th place in the Atlantic Division.  On the year Spencer Dinwiddie leads the Nets in points per game with 22.5 and in assist per game with 6.3. Center Jarrett Allen leads the Nets in rebounds per game with 10.4.  The Nets enter Monday’s game with 3 players listed on their injury report as Kyrie Irving, Caris LeVert and Nicolas Claxton are listed as out.

The Minnesota Timberwolves welcome the Brooklyn Nets to town on Monday night in what should be an interesting game between the two teams.  In their last game, Minnesota was defeated the Cleveland Cavaliers by the score of 94-88.  Jeff Teague led the way on offense for Minnesota as he recorded 18 points while shooting 7 of 14 from the field and 4 of 5 from the free throw line.  Teague also led Minnesota in assists in the game with 4 while playing 27 minutes on the night.  The leading rebounder for the Timberwolves was Noah Vonleh who had 9 rebounds, including 3 coming offensively.

On the year Minnesota is now 11-20 which places them in 5th place in the Northwest Division. Karl-Anthony Towns has been dominant this season, leading the Timberwolves in points per game with 26.5 and in rebounds per game with 11.7. The Timberwolves are led in assists per game by Jeff Teague who as recorded 6.4 assists per game.  Minnesota comes into Monday’s game with 3 players listed on their injury report as Karl-Anthony Towns and Jake Layman are both listed as out while Andrew Wiggins is listed as day to day.