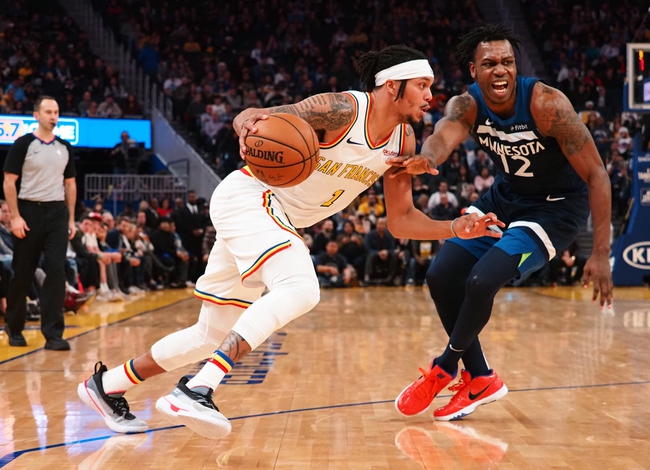 In the Warriors loss to the Spurs, Golden State was guided on offense by Alec Burks.  Burks connected on 9 of 20 attempts from the floor, knocking down 6 foul shots, totaling 28 points.  Glenn Robinson III contributed 25 points and 3 assists.  The Warriors shot 46% from the floor ad 44% from distance.  This game came down to the wire, as both teams were about even the whole way.  Golden State led by 10 points in the game.   The Warriors were our scored 17 to 13 in OT.

In the Timberwolves win over the Nets, Minnesota was led on offense by Shabazz Napier.  Napier converted on 8 of 18 attempts from the floor, sinking 5 foul shots, recording 24 points and 8 assists.  Robert Covington added 14 points and 7 rebounds.  The Timberwolves shot 40% from the floor and 38% from 3-point range.  Minnesota out rebounded Brooklyn, 70 to 66.  Each team saw it's largest lead at 9 points, but the game was dead locked at the end of the 4th.

Warriors are 5-1 ATS in their last 6 games overall.

Warriors are 5-18 ATS in their last 23 Thursday games.

The over is 5-0 in warriors last 5 Thursday games.

The under is 6-1 in Timberwolves last 7 overall.

The Warriors have lost 2 in a row, since winning 4 in a row.  The Timberwolves have lost 8of their last 10 games, but have won 2 of their last 3.  This game is going to come down to the injured list, as both teams are rather comparable on the season.  The Warriors seem to finding a bit more consistency then what was showed earlier in the year.  Minnesota is banged up and players are uncertain for this matchup.  Jeff Teague, Andrew Wiggins, Karl-Anthony Towns and Jake Layman were all "out" for the matchup with the Milwaukee Bucks for Wednesday night.  It is uncertain whether those 4 players will play or not.  Even if they do, I can't imagine the Timberwolves will be at full strength.  I'll side with the Warriors in a toss up game.  Final score prediction, Warriors will outright win, 113-109.