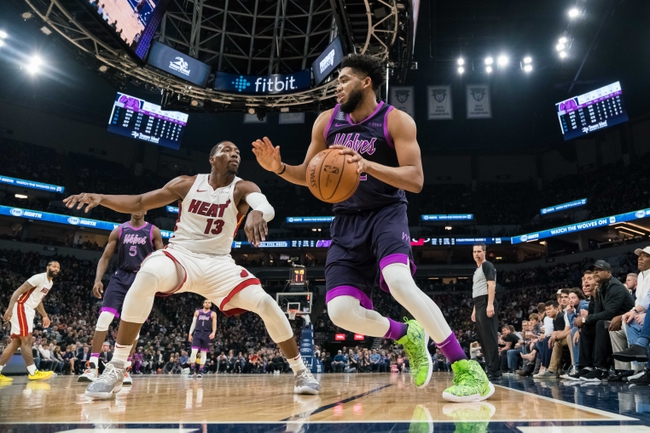 The Miami Heat (2-0) hit the road for a matchup with the Minnesota Timberwolves (2-0). The heat are coming off a 131-126 win at the Milwaukee Bucks.  The Timberwolves won on the road at the Charlotte Hornets 121-99 last time out.

The Heat had 7 players finish in double figures in the win over the Bucks.  Goran Dragic led the way offensively with 25 points and 8 assists.  Bam Adebayo recorded a double-double in the game, scoring 19 points and snagging 13 rebounds.  Justice Winslow also recorded himself a double-double.  Winslow netted 10 points and grabbed 13 rebounds in the win. The Heat as a team had 33 assists to 16 turnovers.

The Timberwolves were 22-19 ATS as the home team.

The Timberwolves were 12-12 ATS as the home favorite.

The over was 22-17-2 when the Timberwolves were the home team.

The series has been split in the last 10 games between the two teams.  Miami has played well against the spread when playing Minnesota.  The Heat are 12-5-1 ATS in the last 18 meetings.  The start that Towns has gotten off to has been a big reason why the Timberwolves are 2-0.  The Heat have done well defensively this season and rank 2nd in 3 point percent defense.  The Heat are holding there opponents to 25% from deep.  Final score prediction, the Timberwolves win and the Heat cover 112-107.